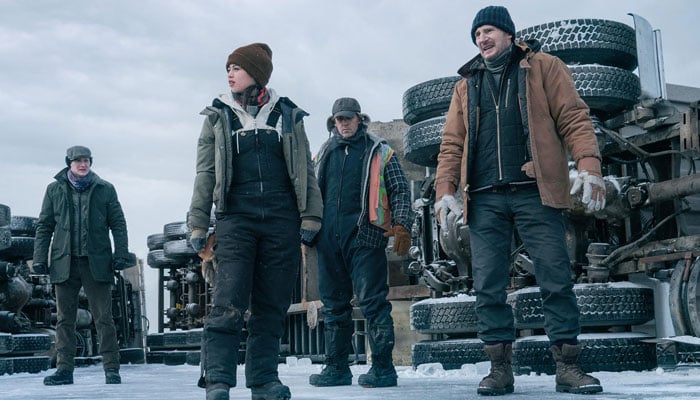 Hollywood’s one of the most dependable action heroes, Liam Neeson, will be featured in one of the hottest scenes in his upcoming Netflix thriller The Ice Road. The Netflix trailer is clear proof.

Netflix has dropped the trailer for Hollywood action star Liam Neeson’s upcoming action thriller The Ice Road, as the action hero spins one of his final action roles in the movies.

In his upcoming thriller, Liam Nesson, along with fellow Oscar nominee Laurence Fishburne, will be on a mission to rescue miners trapped in a Canadian diamond mine.

They have a very short time of less than 30 hours to save the lives of the miners while crossing a thawing ice road. Little do they know, however, that they will have to fight some unknown elements, as corporate interests and secrets will pose serious obstacles to their rescue mission.

Along the way, Liam Neeson and Laurence Fishburne, along with their team, are faced with multiple hardships: a dangerous titular icy road, personal interests and dark corporate entities.

Aside from Liam Neeson and Laurence Fishburne, the talented supporting players include Benjamin Walker, Amber Midthunder and Marcus Thomas with veteran actors Matt McCoy and Matt Salinger playing the human antagonists in the plot.

The Ice Road is one of Liam Neeson’s last action movies. He will also appear in the thriller Memory, which is currently in production.

Announcing his retirement from the action roles, Liam Neeson said it is time for him to transition into other genres at this point in his career.

The Ice Road premieres on Netflix on June 25.

Sweet and sour: The Netflix movie has a brand new trailer