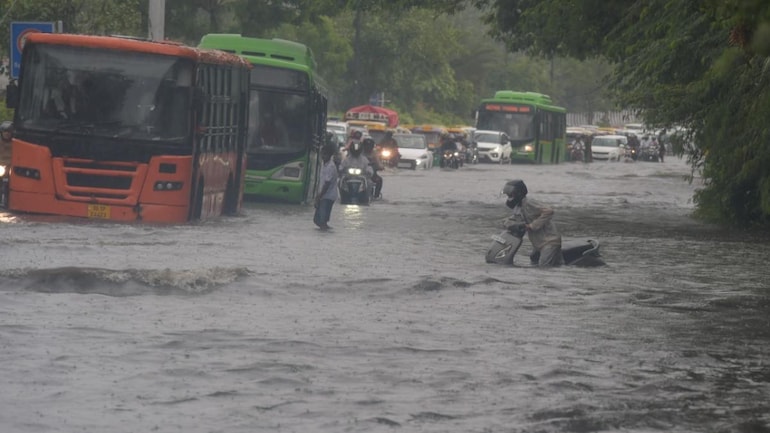 Commuters wade through a swampy street due to heavy rainfall, near ITO in New Delhi. (PTI)

Heavy rainfall in Delhi caused major flooding in parts of the city on Monday morning. Buses were submerged in water in Prahladpur, while several cars drowned in other areas.

Delhi recorded 70mm of rain in the past 24 hours, the highest 24-hour rainfall since 2015, according to the IMD. According to Mahesh Palawat, Vice President of Meteorology and Climate Change, Delhi’s highest rainfall record is 226.2mm of rain on July 21, 1958.

Flooding led to massive traffic jams on the road between Holy Family Hospital and Jamia University, where cars got stuck in standing water shortly after the rainfall.

#WATCH | A bus gets stuck in Prahladpur in Delhi due to flooding after incessant rainfall.

“We went to Faridabad. Now we have nowhere to go. This has caused us a lot of problems. This problem has been going on for 25 years,” said a resident, Imtiyaaz Ahmad. pic.twitter.com/Jz7UkY4Wi4

Heavy flooding was also seen under the Prahladpur underpass where a bus got stuck in the water. News agency ANI quoted a local saying: “We went to Faridabad. Now we have nowhere to go. This has caused us many problems. This problem has been going on for 25 years.”

A similar scene was seen at an underpass in Mahipalpur near the IGI airport, where a bus was half submerged.

A tree fell at ITO in Delhi after the heavy rainfall.

Flooding has also caused major traffic congestion at the busy ITO intersection in Delhi. Traffic from ITO to Deen Dayal Upadhyay Marg was affected by the major flooding on Monday morning.

Meanwhile, clouds remain over Delhi and neighboring areas, while the IMD has said rain, thunderstorms and lightning are likely to continue for a few more hours.

Asics Novablast Review: Enough style and substance to be your next running shoe