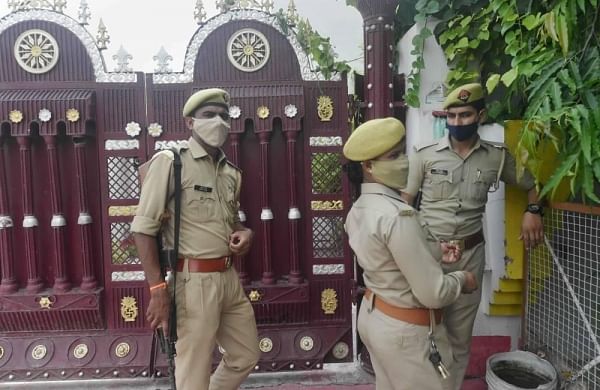 LUCKNOW: The younger brother of murdered gangster Vikas Dubey surrendered in Lucknow court on Wednesday after being in hiding for nearly five months.

Deep Prakash, aka Deepak Dubey, had been in hiding and dodging police since his brother Vikas and his henchmen ambushed and killed eight police officers in the Bikhru village of Kanpur on July 2.

Police had declared a bounty of Rs 20,000 for anyone inquiring about Deepak’s whereabouts. A case of forgery and extortion has been registered against Deepak at Krishnanagar Police Station in Lucknow and his property has already been seized.

The police constantly raided different places to catch Deepak who was on the run. He had previously tried to surrender in court, but was unsuccessful because he did not have a COVID negative report. This time he surrendered, along with the report. Sources said he hid in the courthouse overnight before surrendering.

On Friday, the police seized the property of Deepak Dubey. The whole action took almost four hours under the direction of ADCP Central. His property worth one crore rupee was confiscated. The police have taken this action on court orders.

According to ADCP Central Chiranjeev Nath Sinha, Deepak Dubey and his brother Vikas Dubey, who lived in the Indralok colony of Krishnanagar Police Station, were booked for forgery in July. Deepak Dubey was immersed in those cases and non-bail warrants were also issued against him by the court several times.

Meanwhile, suspended DIG Anant Deo may be in bigger trouble as the SIT, which was created to investigate the police role in the Bikhru case and police-gangster ties, has reportedly proposed a vigilance investigation against the IPS officer posted as SSP Kanpur and was moved as DIG STF just 15 days before the massacre.

According to high-ranking sources, Anant Deo is accused of collaborating with Vikas Dubey and Jai Bajpai (Dubey’s close accomplice) as well as patronizing the gangster. The IPS officer was also charged by the SIT for alleged laxity in carrying out day-to-day departmental work, and evidence that he allegedly indulged in corruption was also collected by the SIT.

Movie Celebrities Who Died in 2020