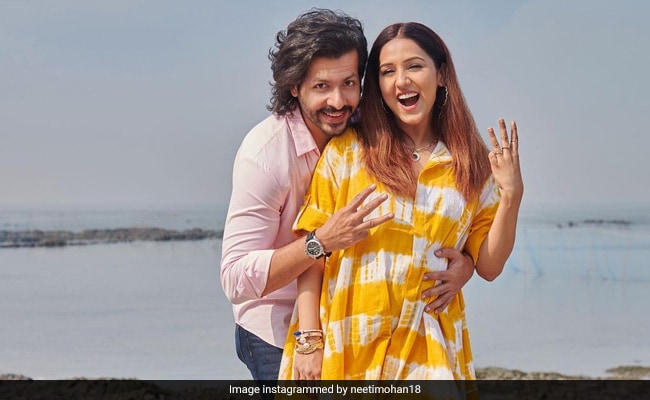 Singer Neeti Mohan and husband-actor Nihaar Pandya made the pregnancy announcement with adorable posts on Instagram. Neeti and Nihaar introduced themselves as expectant parents and wrote: “1 + 1 = 3. Mommy to be and Daddy to be … what better day to announce than our second birthday!” For his part, Nihaar Pandya also added this anniversary wish for Neeti Mohan: “You make everything worthwhile!” In 2019, Neeti Mohan and Nihaar Pandya got married on February 15th at Falaknuma Palace in Hyderabad. Their wedding parties were attended by celebs like Sania Mirza, Ayushmann Khurrana, wife Tahira Kashyap, Aparshakti and others.

Tahira was one of the first celebs to congratulate the couple on their pregnancy. “Yay … yay … yay,” she wrote as Shraddha Kapoor added, “Happy birthday guys.” Gauahar Khan sent the couple best wishes with this comment: “OMG, congratulations you two … God always bless.”

Neeti Mohan and Nihaar Pandya shared a glimpse of their pregnancy photo shoot in the announcement messages. Have a look here:

On an episode of The Kapil Sharma Show, Nihaar Pandya had opened up about his love story with Neeti Mohan – they met at a friend’s wedding. Here’s what he said: “A friend was part of Aasma – the band that Neeti also had a connection with. I’ve always asked that friend to introduce me to Neeti, but it never happened. Surprisingly, on the same friend’s wedding in Goa, almost a year ago I met Neeti formally. I was in love with her … That’s where our love story began. “

Neeti Mohan has popular songs such as Jiya Re, Ishq Wala Love and Saadi Galli Aaja on her resume as a singer. Nihaar Pandya is a model-turned actor, who has appeared in movies such as Manikarnika: The Queen Of Jhansi