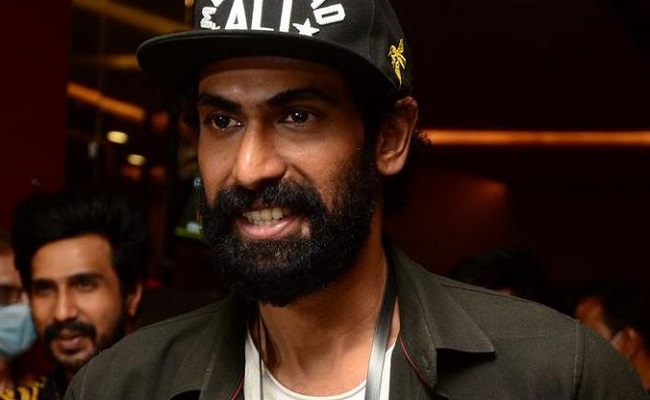 Tollywood actor Rana Daggubati appeared before the Enforcement Directorate (ED) on Wednesday in connection with a money laundering investigation into a 2017 drug case.

The ‘Baahubali’ actor reached the ED office here around 10 am and walked in as a group of security personnel escorted him through a battery of media lens men who competed to capture the moment.

Rana is likely to be questioned by ED investigators about his banking records and financial transactions as part of the investigation into some celebrities’ suspected links to the suspect involved in the case.

Rana is the fifth Tollywood personality to appear before ED. Director Puri Jagannadh and actors Charmee Kaur, Rakul Preet Singh and Nandu have been questioned since August 31.

The ED had issued notices last month to 10 individuals associated with Tollywood and two others, including a private club manager as part of a money laundering investigation into the case involving the smuggling of “Class A” narcotics, including LSD and MDMA.

Nandu was interrogated for more than eight hours on Tuesday. The prime suspect in the Calvin Mascarenhas case and two others were also grilled by the ED investigators on Tuesday.

Actors Ravi Teja, Navdeep. Mumaith Khan, Tanish and Ravi Teja’s driver Srinivas have also been subpoenaed by the ED in connection with the drug racket busted in the 2017 arrest of drug traffickers.

Rana and Rakul Preet were not on the list of Tollywood celebrities surveyed in 2017 by the Special Investigation Team (SIT) of Telangana’s Prohibition and Excise Department.

However, Rakul Preet was questioned last year by the Narcotics Control Bureau, Mumbai, in an alleged drug nexus in Bollywood.

The drug racket was seized on July 2, 2017 when customs officials arrested Calvin Mascarenhas, a musician and two others and seized drugs worth Rs 30 lakh.

They had reportedly told investigators that they supply drugs to movie celebrities, software engineers and even students from some business schools. Mobile numbers of some Tollywood celebrities are said to have been found in their contact lists.

The excise department had set up SIT for an extensive investigation. A total of 12 cases were recorded, 30 people were arrested, while 62 individuals, including 11 people associated with Tollywood, were investigated by the SIT under Section 67 of the Narcotic Drugs and Psychotropic Substances (NDPS) Act and Section 161 of the Code of Criminal Procedure.

The SIT had collected blood, hair, nail and other samples from some of those who appeared before him for questioning and sent them in for analysis.

The SIT has filed charges in eight of the twelve cases. However, it provided clear information to the film personalities who were questioned as part of the investigation.

Somy Ali on the untimely death of Sidharth Shukla