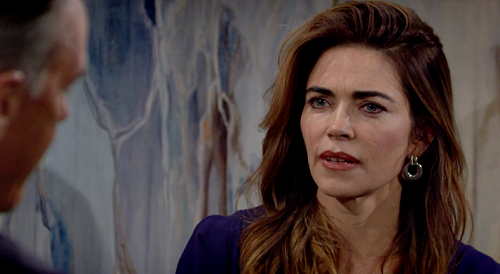 The Young and the Restless spoilers tease that Ashland Locke (Richard Burgi) will be upset to see that his health status is no longer private. The obvious culprit is Billy Abbott (Jason Thompson), whose purported journalistic ethic is just a ruse to create hit pieces.

Ashland’s communications company is one that Victoria Newman (Amelia Heinle) labeled as desirable. She used that opening to play out his fondness for her and led to the start of merger talks with Newman Enterprises.

Victoria’s hopes of closing a deal were not tied to the belief that Ashland’s cancer diagnosis would remain private indefinitely.

Victoria wanted to face the situation and kick-start the merger process, beating other bidders and negating the effects of corporate vultures.

Young And The Restless Spoilers – Ashland Locke’s Clock Is Ticking

Ashland has about five and a half months to live. He told Victoria he had six months to go in the past two weeks, so do the math.

This is daytime, so he could go into remission at any point in the plot. Alternatively, Y&R’s newest couple, the Lockeness Monsters, may just be short-term players. But Tara Locke (Elizabeth Leiner) could stay in power if Ashland dies, as he expects.

Victoria knew that Ashland found her very attractive many months ago. That came at the time when she was one of three bidders for Cyaxares.

Ashland’s dinner invitation was declined at the time, with Victoria’s reference to Tara’s inclusion in the offer rejecting the proposal.

However, the subsequent end of his marriage made possible an alliance of friendship.

The daughter of Victor Newman (Eric Braeden) cut her corporate teeth at the foot of her ruthless father. So, Victoria takes notice of Ashland who awarded Cyaxares to her on a coin flip that Billy lost and then still sold the company to Victor.

Young And The Restless Spoilers – A Deal To Have?

Burgi’s character has proven to be more than a one-dimensional villain.

Victoria’s pitch to Ashland was accepted because Newman Enterprises is best suited to further his legacy. But will that deal stand to completion based on all the swirling circumstances that now encompass public knowledge of Ashland’s dire plight?

The desired answer to the above question is one of the reasons viewers continue to watch Y&R.

This site is a leading resource for all things The Young and the Restless. Check back regularly for Y&R spoilers and news!

Sen Cal Kapimi Episode 43 Release Date And Time, Countdown, When Is It Coming Out?