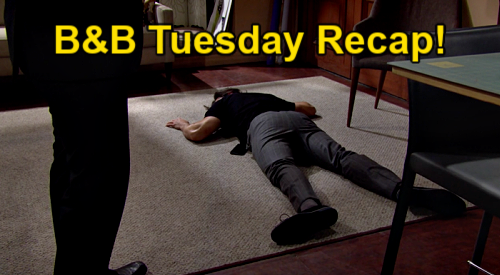 Inside the cabin, Hope Spencer (Annika Noelle) sniffed at Liam Spencer’s (Scott Clifton jacket) and draped it over herself as she sat on the couch. Hope clearly missed Liam, but Steffy Forrester (Jacqueline MacInnes Wood) pulled her out of the trance.

Steffy wanted to talk about what Liam and Bill were doing, but Hope blamed Bill for the cover-up.

Steffy thought it was so ironic that Vinny Walker (Joe LoCicero)—the person who had turned his life upside down by tampering with the paternity test—was the person who hit Liam.

The conversation turned to the kids and how none of the women wanted to explain why Dad would be gone for a very long time.

Hope wanted to remain hopeful that Liam’s name would be cleared. She suggested working with Steffy to keep Liam focused on positivity, so Steffy agreed that they should come together as a family.

Hope was ranting that Bill was making a mess, but Steffy felt that the only thing that worked in their favor was the truth. Hope suggested there must be a way to prove Liam’s innocence.

In the lock-up, Bill was pleasantly surprised to see that Katie had come to see him. Katie couldn’t believe she was visiting Bill in prison and lashed out at Bill, turning an accident into a crime scene.

She added that Will Spencer (Finnegan George) might lose both his father and his brother as her mood flared, but she eventually settled.

Katie shared how angry and confused Will was, even though he tried to stay strong for his mother. It frustrated Katie because Bill was so focused on Liam that he forgot about his other sons.

Katie wished Bill had considered how protecting Liam would affect their family, including Katie.

Bill regretted it, but admitted he wouldn’t have done anything else if he’d had more time to think about it. Bill insisted he had to protect Liam—just like he would protect Katie or his other sons.

Katie understood how Bill worked, but from a prison cell, she couldn’t understand how he intended to make it right.

Bill claimed he had complete faith in Justin, who had never let him down before. Bill didn’t think Justin would abandon him now, either.

At Forrester Creations, Thomas replayed the video while processing the fact that Vinny had committed suicide and wanted Liam to hit him. “What the hell, Vinny?” Thomas said to himself.

He pondered Vinny’s video and his friend’s words about Thomas having the family with Hope he deserved.

Thomas glanced at the delete button as if to delete the video, but he eventually declared that the truth had to come out. Before Thomas could leave to tell anyone else, Justin appeared.

Justin was there to ask Thomas about Vinny, the poor drug dealer, but Thomas claimed he was much more than that.

Nevertheless, Justin objected that he was trying to get his clients out of jail. When Thomas said they’d be gone much sooner than Justin thought, Justin wondered what that meant.

Thomas eventually admitted the act was intentional, but not on Liam’s part. He revealed that Vinny committed suicide by standing in front of the car and framed Liam for murder.

Thomas explained that it was another misguided attempt by Vinny, who was trying to get Thomas and Hope back together. He added that the proof came from Vinny himself, as the previously blocked messages just came in.

Thomas assured Justin that all the evidence was on his phone, which meant Liam and Bill could get out of jail.

“It’s a game-changer all right,” Justin said. Thomas was about to leave when Justin caught his attention again and knocked him unconscious with a heavy blow! We will provide updates as other B&B news comes in.

The Morning Show Season 2: Release Date and Everything You Need to Know

Samsung Galaxy Tab S7 FE Review: You can stop looking for an Android tab that can also be a laptop