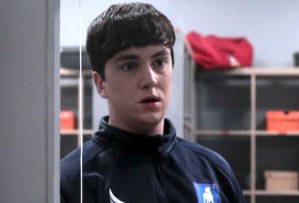 We need to talk about Nathan F–king Shelley.

The assistant coach is letting his newfound fame go to his head this week. In turn, he turns into the type of person he hates the most in this world: a bully—and a pretty menacing one, too.

Nate’s transformation begins during training, when the “Wonder Kid” scolds Colin for making fun of him. But Jamie and Dani were pissing on Nate too, Colin says, so why does the former kitman have it for him?

“You see, Jamie and Dani are like Picasso and Gauguin,” explains Nate. ‘They are artists. And Colin, you paint too, but your work doesn’t end up in museums. It hangs on… well, you’re like a painting in the Holiday Inn. You don’t inspire, you don’t move people. You are… there. You’re covering a bloodstain. You do the work, so… just do the work.” (ouch!)

The next morning, Coach Beard confronts Nate for being rude to Colin, telling him to “do better.” Nate, in turn, apologizes to Colin in front of the other players, but the tension doesn’t end there.

Later, the team gifts Nate his own jersey with the unwelcome nickname “Wonder Kid” on the back. It was new kit man Will’s idea – clearly a kid’s way of trying to win over his predecessor – but Nate isn’t happy. Beneath his forced grin is obvious contempt.

As the episode draws to a close, Nate is scrolling through Twitter when he notices that someone has called him a “loser.” Furious and determined to take it out on someone, he walks from his office to the equipment room and threatens Will. He throws the “Wonder Kid” jersey at the poor man and warns, “If you ever do anything to humiliate me again, I’ll make your life hell.”

So, is it okay to hate Nathan now? Before you answer that, scroll down for other notable moments from “Headspace.”

* Ted is reluctant to accept Sharon’s help, so much so that he becomes mean to her. He tells the psychologist that therapy is not true and essentially calls her a bulls-t artist. His words hurt, but she understands where they come from – it was a fight and flight response, she admits — and accepts his eventual apology. By the end of Episode 7, the Coach is ready to sit down with her and get to the root of his lingering fear, even though the truth may be too hard to bear. “The truth will set you free,” Sharon tells him. “But first you get mad.” 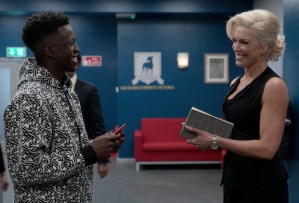 * It has been two days and Rebecca has not yet responded to LDN152’s request to meet in person. Keeley and Higgins encourage the team owner to meet her mystery man – at this point Rebecca still doesn’t know she’s corresponding with Sam – but she remains very on the fence. (Midway through the episode, Rebecca and Sam have an awkward meeting in the hall, but neither peeks at the other’s phone, both of which are open to Bantr.)

* Keeley, meanwhile, struggles with the “cute furry shadow” in her life. Now that she’s teamed up with boyfriend Roy, she never has time for herself and resorts to Nelson Road gear to smuggle cigarettes and hear herself think. Roy is slow to pick up on Keeley’s frustration and then storms out of her house when she confronts him about his constant presence. Ultimately, it’s Jamie, of all people, who helps Roy (albeit unintentionally) to understand that Keeley just needs some space. So Roy returns to Keeley’s that evening and surprises her with a candlelit bubble bath. Then he promises to make himself scarce for the next three hours.

What did you think about Ted Lasso Season 2, Episode 7? Leave a comment with your full review.

The D’Amelio Show: how to watch the reality series online