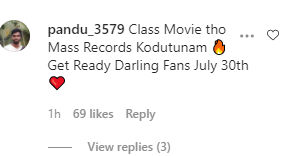 After keeping fans on their toes for a long time, creators of the highly anticipated upcoming Telugu romantic drama Radhe Shyam released a teaser on Valentine’s Day. To make the day even more special and memorable, creators of Prabhas and Pooja Hegde starrer movie shared a little glimpse of the movie that showed the Baahubali actor as a man in love.

The teaser opens with Prabhas’ character calling out to lead the female actor, Pooja Hegde, at a train station. He can be seen looking for his feminine love saying, ‘Sei Un Angelo? Devo Morire per incontrarti? (You’re an angel? I have to die to meet you). Towards the end of the teaser, Pooja asks Prabhas if he sees himself as Romeo. He says he’s not Romeo to die for his love. Prabhas shared the teaser on Instagram and also announced the release date. The film will hit the screens on July 30, 2021. Signing the post, Prabhas wrote, “Celebrate the day of love with a glimpse of #RadheShyam .. #ValentinesWithRS. Released in theaters on July 30, 2021. “

The fans are intrigued by the rules of Prabhas and have started looking for the meaning. One of the users poured out his love for the actor and wrote, “I love you so much, honey.” Another user wrote, “Love it bangaram.” A third user agreed, writing “it will kill all other records.” Another repeated similar feelings and praised the actor’s appearance in the film. “Thanks, Anna, no one can ever match your level.”

According to various media reports, Prabhas will play the role of a palm reader, while Housefull 4 actress Pooja Hegde will play the role of a music teacher. Both stars have worked together for the first time in this director of Radhe Krishna Kumar. Radhe Shyam went on the floor last January. Amid the coronavirus pandemic, the team successfully completed the Georgian schedule and returned safely to India. The team recently resumed shooting in Hyderabad for the final schedule of the film. Radhe Shyam.

Previously, Prabhas had shared a new poster of the movie while showing off his looks. Dressed in an orange t = shirt with striped black pants, the actor grabbed the eyes of his fans. Radhe Shyam’s poster also gave viewers a glimpse of the time where the movie is set. The other Radhe Shyam cast includes actors Krishnam Raju, Sachin Khedekar, Priyadarshi Pulikonda and Bhagyashree. The film was shot simultaneously in Telugu and Hindi. Independent of Radhe Shyam, actor Prabhas will also appear in films Salaar and Adipurush. Prabhas’ movie Salaar is an action thriller film directed by Prashanth Neel van KGF fame.

Read: Mahesh Babu’s’ Ramayan ‘& Prabhas” Adi Purush ‘to lock horns at the till