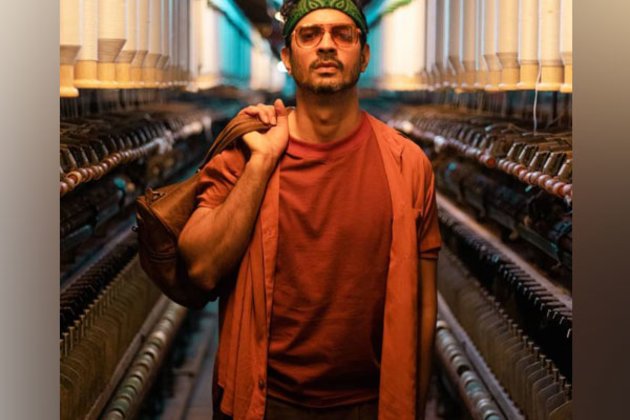 New Delhi [India]Feb. 9 (ANI): Bollywood actor Tahir Raj Bhasin, who will soon be treating his fans to the upcoming ‘Looop Lapeta’ outing, shared his character’s first look from the movie on Tuesday.

The actor took to Instagram to introduce his character Satya from the upcoming movie, which also stars Taapsee Pannu. In the photo, Tahir can be seen wearing a red T-shirt paired with a loose shirt, a green colored bandana and retro tinted glasses as a stylish cycling dealer on a mission. The actor also has a nose piercing.

Tahir shared his first look from the movie, writing, “If there was a faster way to make 2 minute noodles, Satya would find a way! I had a great time playing with him and got super kicked over this first one. gaze. Meet Satya! The irreverent, sweet “jholer” in the craziest ride of the year, “Looop Lapeta”, starring @taapsee. “Tahir, who will be sharing screen space with Taapsee for the first time, also spoke about his character from the movie, saying he is “a risk-hunting charmer.” The actor said, “Satya is irreverent. I am a risk-chasing charmer in the movie and I had an incredible time playing him. He’s quite outdoors in his optimism and lust for life. I would describe him as a whole. silver lining and not a cloud. He’s a con man who believes with all his soul that the universe is conspiring in his favor. “He added:” The look has him in a loose brown shirt, he dons these retro sunglasses and has a nose piercing All these style cues are created in sync with his personality of being the laid back rebel. ” Tahir, who likes to play the quintessential Bollywood hero for the first time in ‘Looop Lapeta’, said, ‘it was super exciting.’ He went on to say, “Growing up with your dose of Bollywood, it seems like very familiar territory. Satya is the laid-back charmer your parents have warned you about. Aakash Bhatia and producers Atul Kasbekar and Tanuj Garg have put their hearts into being creative. balancing the style and humor the hero brings to the script. With the spectacular Taapsee acting in the opposite way, exploring romantic chemistry on screen has only become an incredibly fun and rewarding experience. ”On February 2 The creators had unveiled Taapsee’s first look from the movie, an official remake of the German movie ‘Run Lola Run’ written and directed by Tom Tykwer.

Franka Potente played the titular role of Lola, while the movie also starred Moritz Bleibtreu. The German film follows a woman who needs 100,000 German marks in 20 minutes to save her boyfriend’s life.

Alongside ‘Looop Lapeta’, Tahir, who was last seen in Nitesh Tiwari’s ‘Chhichhore’, along with the late actor Sushant Singh Rajput and Shraddha Kapoor, is waiting for the release of ’83’, which also features Ranveer Singh and Deepika Padukone to be. (ANI)