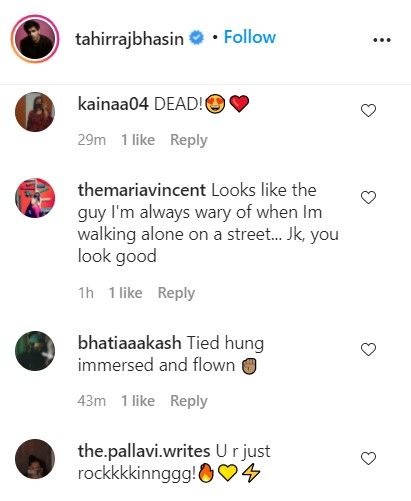 Tahir Raj Bhasin is currently in Goa filming for the upcoming thriller comedy titled Looop Lapeta, starring Taapsee Pannu. Looop Lapeta will be a Hindi adaptation of the classic German film, Run Lola Run, which was released in 1998. The Hindi remake is being directed by Aakash Bhatia, who will also mark his debut as a film director. The actor took to Instagram and shared a glimpse of the movie set in Goa.

The photographs of Tahir Raj Bhasin

Chhichhore actor Tahir Raj Bhasin is in Goa shooting his movie, Looop Lapeta. He shared a glimpse of his look from the movie and how Goa’s atmosphere started to feel like home to him. The cast and crew have been there for the past 41 days and there are only two days of recording left. Tahir Raj Bhasin’s caption read, “Goa’s atmosphere is starting to feel like home. We are on day 41 with a 48 hour countdown before closing the looop. Enjoying the camera being strapped, hung, submerged and flown wherever I go. look! ” Tahir Raj Bhasin placed the first look of his character Satya for the film Looop Lapeta on Instagram on February 9, 2021. His caption read: “If there was a faster way to make 2 minute noodles, Satya would find a way! I had a great time playing with him and got super kicked about this first look. Meet Satya! The irreverent, sweet “jholer” in the craziest ride of the year, Looop Lapeta. “Tahir wore the same orange outfit in the character’s reveal post that he donned in his latest photos. He spread hippie vibes with his bright clothes. and a brown duffel bag, along with the green hat.

The Films of Tahir Raj Bhasin

Tahir will then star with Deepika Padukone and Ranveer Singh in the highly anticipated sports drama, 83The director of Kabir Khan tells the story of the cricket legend Kapil Dev. The actor was last seen with Sushant Singh Rajput in Chhichhore and is known for his characters in Mardaani, Force 2, Kai Po Che among other things.

Analyst: Disney + surpasses Netflix in subs by 2026, powered by Hotstar