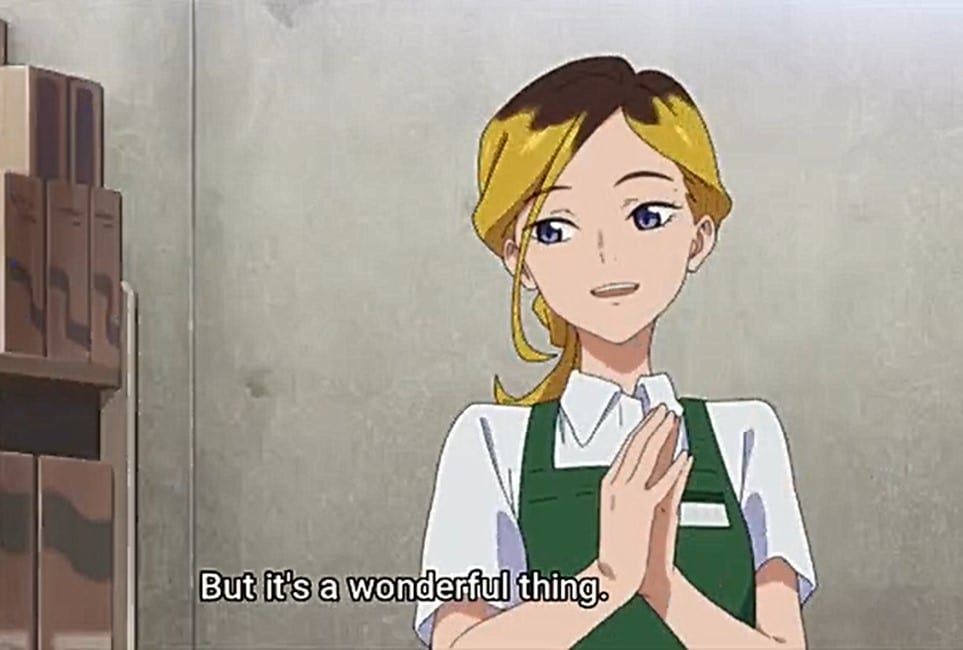 In the morning Yomogi learns to use his Dynazenon; he learns new movements from Gauma. Yomogi wonders why Minami didn’t show up today. He thinks she is not coming to train today and he is not concentrating properly because Minami is not there. Yomogi falls with his Dynazenon while thinking about Minami. Gauma told Yomogi to focus and stop slacking. Chise and Kiyomi told him to relax. Gauma wonders why Yomogi loses focus, and Yomogi falls again.

Chise asks if Yomogi is not in pain. Later after the training, Yomogi realizes that he cannot live without Minami. He asks Gauma about Minami, and Gauma reveals that she has called and tells him she is meeting someone. Yomogi realizes that Minami has gone to meet the punks on her own. He decided to leave and told Gauma he would see him later. Gauma thought that Yomogi is slacking, which is why he is leaving training so early. Later, Yomogi boards a train, wondering who will see Minami besides the punks.

The lady reveals that it is a club choir video that has Kano in it. Minami asks if it is okay to talk to Urita. The lady replies that Urita would be happy to help her. Minami thanks the lady for her time. The lady wonders if she is walking and asking people about Kano. Minami reveals why she wants to learn more about Kano. The lady only let Minami drink coffee, but she told her she would let her know if she got more information. Yomogi goes to his part-time job and works with his partner.

But he thought about Minami elsewhere, since she never contacted him. His partner notices that Yomogi is worried about something, and it is difficult for him to open up. She told him he’s in love and it’s written all over his face. Yomogi pretends it’s not him. The girl told him he’s been acting weird since he got to work. She asks him if he likes someone, and Yomogi gets around it. The girl throws a box at him and demands that he tell the truth.

But it is difficult for Yomogi to tell how he feels about someone. Yomogi thought the boxes she threw at him were too heavy, and he told her he is in love. The girl was amazed at his answer, as he did not hesitate to accept the truth. She told him it is wonderful to fall in love. She realizes she’s out of luck when it comes to love. No one has ever come to confess for her.

The girl looks at herself and realizes she’s a hot thing. She advises Yomogi to pick up his socks and confess to the girl before it’s too late. She got closer to Yomogi and told him to ask the girl he was in love with on a date. Later, Yomogi met Minami. Before asking her for a date, Gauma called them and told them to bring Dyna Wing. They go out and fight tough punks and defeat them with the help of Gauma. After the fight, Yomogi told Minami that he would go with her if she left.

SSSS Dynazenon Episode 5 Release Date and Where to Watch It

SSSS Dynazenon Episode 5 will be released on Friday, April 30, 2021 at 10:00 PM JST. You can watch the new episode of SSSS Dynazenon online at Funimation and AnimeLab.