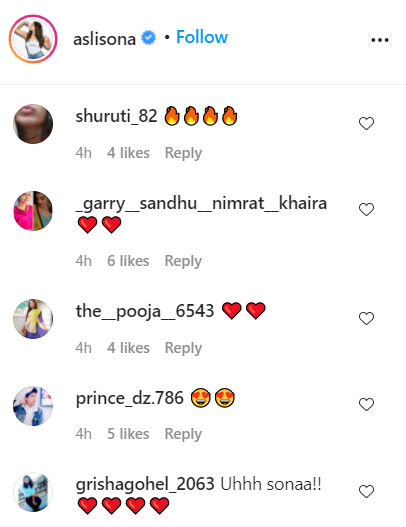 Sonakshi Sinha recently treated her fans to a beautiful selfie on Instagram. She stepped into the sun and clicked. She is a true nature lover and her posts on her social media account are proof of that. She took to Instagram to share a photo while posing in the beauty of nature. She added to her caption her thoughts that said nature didn’t need a filter.

In her post, she can be seen posing next to the plants as their shadows reflect on her face. She was wearing a white T-shirt with her hair tied in a bun. She opted for minimal make-up and hung her headphones around her neck. The caption on her post read, “Nature doesn’t need filters, but can be a cool filter.” Check out her post and some of the reactions from her fans and followers below.

Also read: Sonakshi Sinha shows how she waits when her ‘order is shipped’ | Watch

She previously shared a monochrome photo showing her in the sun. She opted for a top, pants and jacket and let go of her hair. She stood barefoot and covered her face with her hand as the sun shone on her.

In another post, she was seen at a gala time in a garden. The photo was clicked from behind as she posed sideways. She sat on the grass with the sun, sea and palm trees in the background. Her caption read, “We are from Earth … we return to Earth … and in between we garden.”

Sonakshi also shared a photo of the sunrise. The actress can be seen by the sea in an all-black outfit. She paired her look with a silver watch and her hair was open and tousled.

Sonakshi Sinha made her acting debut in the action drama film Dabangg in 2010. She has appeared in many movies, such as Rowdy Rathore, son of Sardaar, Mission Mangal and more. She was last seen in Dabangg 3 (2019). Her upcoming movies include Crazy Hum and Bhuj: The Pride Of IndiaShe will also star in director Shree Narayan Singh’s film, which is tentatively titled Bulbul Tarang.