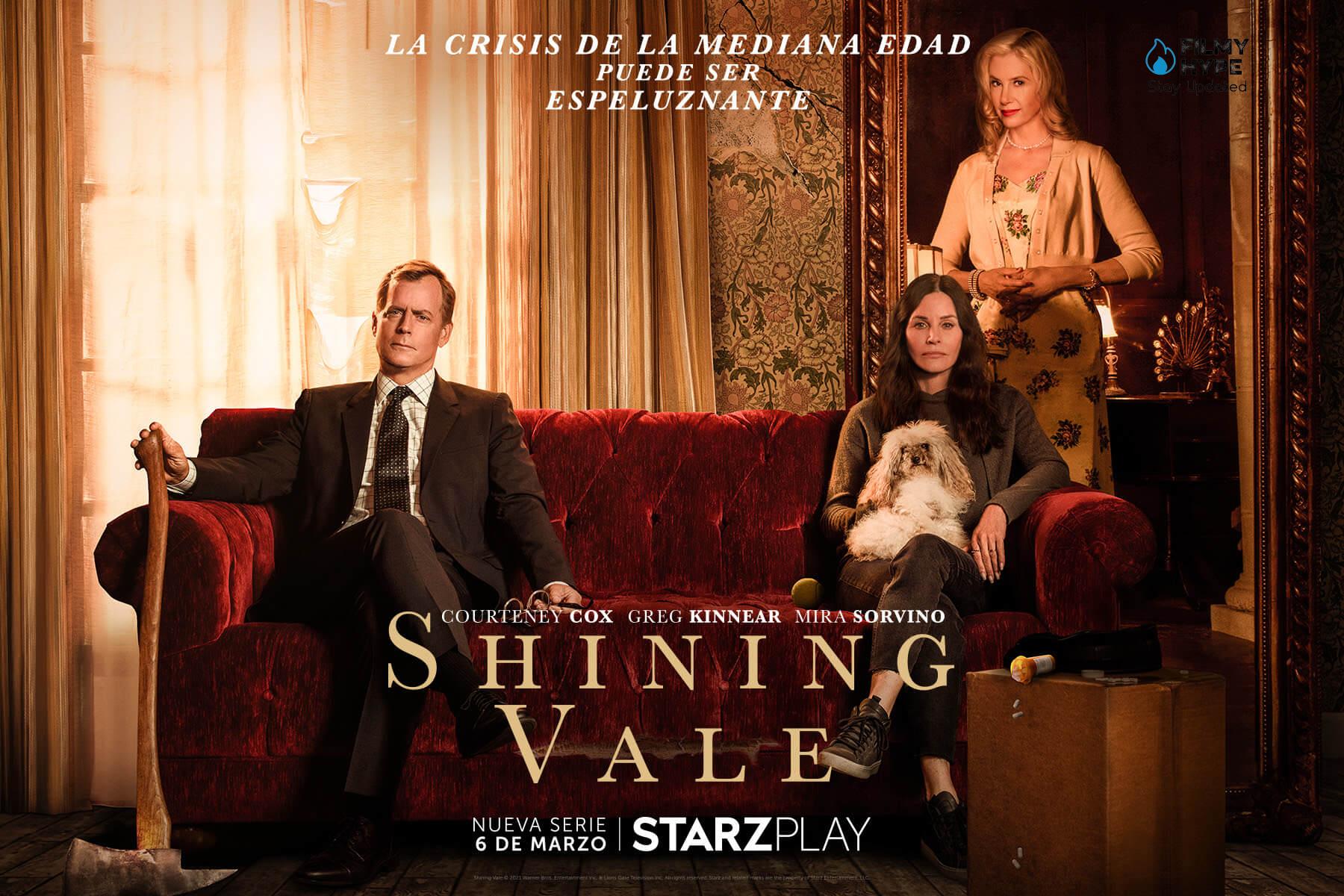 Filmyhype.com Ratings: 3.5/5 (three and half star)

Shining Vale Review: Shining Vale is the new TV series starting today Sunday 6 March on STARZPLAY with 8 weekly release episodes simultaneously with STARZ. The series sees the great return as a protagonist for Courtney Cox flanked by Greg Kinnear, Mira Sorvino, Merrin Dungey, Judith Light. In short, Warner Bros and STARZ certainly did not spare themselves on the cast. The TV series is a horror-comedy, indeed a comedy-horror starting from the 30-minute format on which it is built, created by two experts of the genre such as Jeff Astrof and Sharon Horgan. Astrof after making us laugh with true crime with Trial & Error this time engages with horror while Horgan picks up the thread of complex female characters after Catastrophe and Divorce.

Born from the mind of Sharon Horgan and Jeff Astroff, the series tells the story of the Phelps family, who move from the city to the provinces of Connecticut in a large, very old house. We meet them on the day of the move, in the car: Terry, the father, talkative and strong-willed, who tries to keep up the morale of the family; Gaynor, a awake teenager, angry at her parents for this transfer, all jokes and smartphones; Jake, a geeky kid, with a console in his hand, who lives with the VR headset glued to his face. Finally she, Patricia, our heroine, sitting wearily in the passenger seat, looks absently from the window, while her family quarrels and tries to talk all together, is distracted by something, a fantasy or a memory, a moment of passion overwhelming with a man who is not her husband.

Once inside this huge and creaking house, Patricia immediately realizes that something is strange, she begins to hear and see things that she is not sure really exist. As the story evolves we discover more things: why the family moved, Gaynor’s motivations for wanting to take certain courses at the new school, the strange virtual realities that Jake experiences, Terry’s relationship with a colleague of his. Patricia’s need to get back to writing and publishing her second novel, after the overwhelming success, many years earlier, of an itchy and best-selling novel.

Shining Vale is the name of the town where the story takes place, as has already happened to very successful series, for example Twin Peaks (which comes to mind because in the cast of this starzplay series there is also Sherilyn Fenn, the beloved Audrey Horne). The name of the place where an event with macabre outlines takes place gives the place itself, which tells the story, a macabre aura, which helps to build the atmosphere of mystery. But what is particularly about Shining Vale is that this atmosphere of unease is constantly ripped apart by the comedy. There is a comic, funny, irreverent soul in the series that is irresistible, perhaps thanks to the comedic talent of Courteney Coxwho steals the show from anyone and in some situations recalls his brilliant Monica Geller.

But the protagonist of Friends was as faithful and precise as Patricia is messy, messed up and neurotic, whose sensitivity puts her in communication with a world that she does not understand and that tries to scare her, if only she, in a master stroke she tries to exploit this mystery , which has the evanescent face and appearances of Mira Sorvinoto her advantage.

The opportunities offered by platforms disconnected from the schedule cage should not become preconceived concepts. Just as not all Netflix TV series benefit from full episode releases, weekly releases for some TV series are harmful. As in the case of Shining Vale. After the first episode, the feeling is that the story has not really begun and more than the curiosity to see how it continues, you are left with the doubt that there is something to tell.

With Shining Vale you must be patient, wait at least three / four weeks and the respective episodes to let yourself be captured by the atmosphere of the TV series. And having had the opportunity to preview seven episodes out of eight, the first episode almost does not represent what becomes the TV series. The second part of the season clearly pushes more on the accelerator both on the “horror” and on the “comic” front. For this it would have been better to break the pattern of the weekly episode of STARZ and STARZPLAY and release at least the first 3 episodes on the model of Hulu but why not, also directly the whole series.

If you want to try and figure out whether to see Shining Vale, you need to understand how much you love horror. If you can’t take the risk of scaring yourself in the slightest, then it’s not for you. It is also difficult to suggest similar titles, certainly we can think of Trial & Error, Catastrophe and Divorce to find the style of the authors, while on the mix between comedy and horror it could be an idea What We Do in the Shadows but also the first season of Killing Eve†

Shining Vale is never really scary, but at the end of each episode you feel the burning and irrepressible need to know “what happens next?”, And in a television (and platform) landscape saturated with stories, it is a remarkable value. Well now only 2 episodes are streaming which are decent to watch.

Next Time On… Love (ft. Marriage and Divorce) season 3, episodes 5 and 6