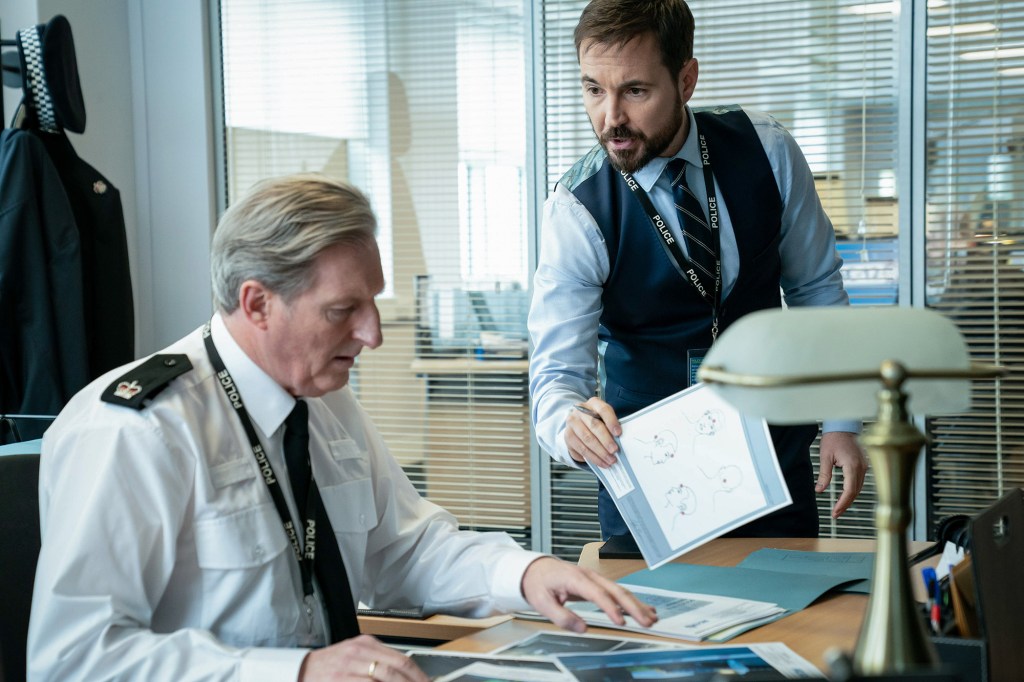 The Season 6 finale of the BBC’s corruption drama “Line of Duty” has captured over 15 million viewers – the most watched British drama episode of the century.

“One of the things we do with ‘Line of Duty’ is to reward our loyal fans who are familiar with previous seasons, but it’s very important that we make the show fully acceptable to new fans,” said the creator / writer. from the series Jed Mercurio on The Post. So every season starts with a new character who has never been portrayed on the show before … and in season 6 it’s Kelly Macdonald who plays a lead detective. [DCI Joanne Davidson] investigating the murder of a journalist, Gail Vella. When the season starts, this murder investigation is about a year old and they still haven’t identified a prime suspect.

“We come into our story when there is a breakthrough in the case, bringing the anti-corruption department into the story because there are suspicious circumstances surrounding the suspect’s arrest.”

That’s just the tip of the proverbial iceberg, and as the seven-episode season unravels, Joanne Davidson is suspected in connection with the murder of Vella – while doubts are raised about members of the anti-corruption unit, including Chief Inspector Hastings.

“In developing the series, it was originally important that the internal affairs officers were no more sacred than you,” Mercurio said. “I wanted the police under investigation for allegedly corrupting operate in some kind of moral gray area so that the public could have sympathy for them and we could divide the public’s loyalty and also create mystery around the police under investigation. They may not be guilty of what they are being investigated for … there may be another explanation and they are actually good agents.

“Whether one of these anti-corruption workers ended up committing corruption themselves – or whether they take immoral or unethical steps in their professional life that will continue to haunt them – are all very important to the show’s identity.”

Mercurio writes every “Line of Duty” episode himself, as he did with his other BBC viewer, “Bodyguard,” starring Keeley Hawes and Richard Madden and streamed on Netflix in the US. It’s not an easy task, as each episode lasts about an hour, with no commercial interruptions, and the series takes a deep dive into each of the season-long cases, with references to characters from the past.

“I mapped out the main points of the season, the main twists of the story, the development of the main character and the dramatic concerns,” said Mercurio. “The way the show is written, episode by episode, can be a journey of discovery. It can become clear that some of our plans will not work and may need to be revised to the point where we step back and adjust the overall plan for the entire season. ”

Mercurio attributes the enduring popularity of “Line of Duty” to a central conceit.

The essential difference is that it’s police versus police. We are the only police drama series dealing with corruption, which is an intrinsic part of our stories, ”he said. “One of the reasons we didn’t have a smooth journey to get up in the air [at the start] That was the vast majority of police shows what you might call “propaganda,” the drama of reassurance about police work. There were doubts among the network executives that the audience would not welcome a show that raised questions about police misconduct and violence.

But what we’ve shown, season after season, is that the public will buy that and share some of it with their concerns about the way our institutions are set up … and whether they are guilty of misconduct or elements of corruption.

“The other shows don’t ask those questions,” he said, “and maybe they do [our fans] view ‘Line of Duty’ in a different way. ”