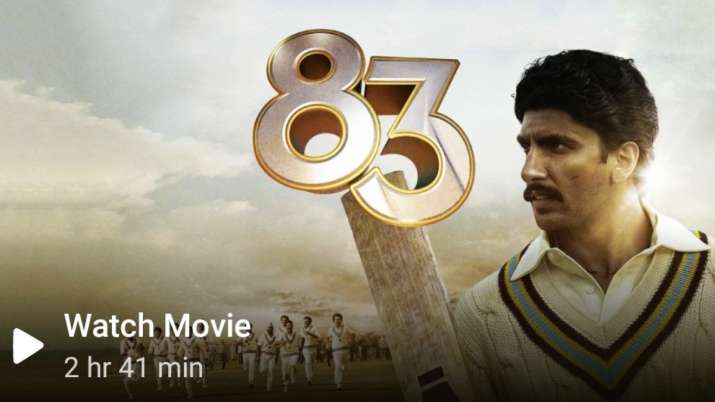 Ranveer Singh starrer sports drama ’83 soon after its theatrical release on Dec 24 found itself in troubled waters as the third wave affected its run. It ditched the digital route and made its way to the broadcasting medium and premiere on Star Gold. Well, now Kabir Khan’s directorial blockbuster film is all set to take the cricketainment quotient several notches higher by releasing on not one but two OTT platforms. Yes, that’s true! ’83’ has been made available for streaming on not just Disney Plus Hotstar but also Netflix India. You will now be able to take a nostalgic trip down the epic memory lane of the 1983 World Cup victory once again through the digital release of the film.

The underdog journey recently witnessed a successful television premiere on Star Gold on 20th March. With a powerful combination of digital and television premieres, fans of cricket and Bollywood across the lengths and depths of India can watch this movie on their choice of platform, at their convenience, and in their preferred language.

Just in case, you are unversed in where, when and how to download the film in HD, have a look at these details here:

Who are the producers of 83?

You can watch the movie now on OTT platforms like Disney Plus Hotstar and Netflix.

When can you watch 83 online?

Ranveer Singh’s movie ’83’ is currently streaming on both platforms.

You can download 83 to watch offline if you have paid subscriptions to Netflix and Disney Plus Hotstar.

The film beautifully captures the journey of India’s triumph at the 1983 World Cup, which arguably remains the greatest cricketing moment in the history of the nation. The Kapil Dev-led Indian team weren’t even considered as one of the contenders to go all the way, yet they stood up against extreme odds and delivered at the grandest stage of all.