Vijay Deverakonda – Telugu Cinema’s favorite resident rowdy, and Bollywood actress Ananya Pandey have caused quite a stir with their upcoming romantic sports film Liger, which will be released across the country in five languages.

Directed by Puri Jagannadh, this pan-Indian film headed by Dharma Productions has been posed as a potential blockbuster guaranteeing a ‘dhamaakedar’ punch in entertainment.

As a sign of Vijay’s Bollywood debut, the release date of this multilingual film will be announced today, February 11th. It will be released in Tamil, Telugu, Hindi, Kannada and Malayalam.

We wish the protagonists and the Liger team all the best and keep the excitement alive, presenting some snaps of the actors from their set who went viral while filming.

This photo surfaced when the duo were spotted heading to the shoot on a ferry in Versova.

Ananya in white hot pants, a T-shirt and a Vijay in a super cool casual outfit – looked pretty chilly. This photo got a lot of trolls for their apparent intimacy.

Ananya is a real star now with back-to-back movies and recommendations down her alley. This photo of her and Vijay on the bike is quite fun and impressive.

After Khali Peeli, Ananya was all set to shoot her next movie in this picture. Looks like a script reading session, both were featured during a gala time on set.

The third photo posted to Instagram shows director Puri, producer Charmy Kaur along with Ananya and Vijay. They are all smiling and energetic for the highly anticipated movie.

Entitled ‘Happy, Blessed and Excited’, the fifth photo does indeed radiate the cheerful atmosphere. They seem to be having a blast.

The photo shows the cute Ananya and Vijay facing each other, sitting on the fuel tank of the bike in a black outfit, and the Dear Comrade star donning a beanie, casual pants and a shirt.

Yet another photo surfaced online showing the petite Ananya dressed in white and the current generation Vijay’s heartthrob looking gorgeous. 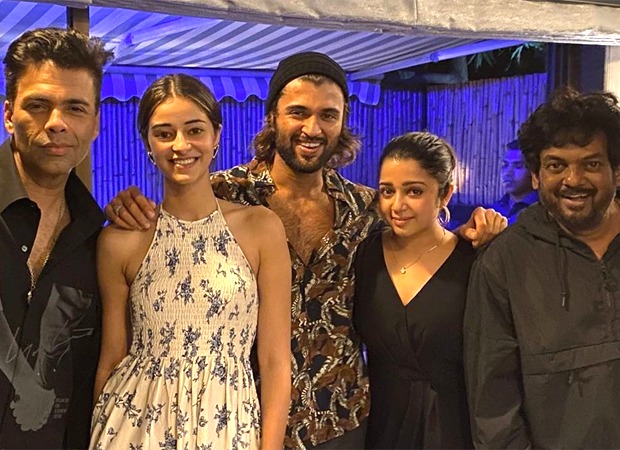 This photo with the beautiful cast, where Karan, Puri and Charmy posed wonderfully, was also a treat for fans. Don’t miss the cute little dog in the picture, looks cute among the gorgeous celebs.