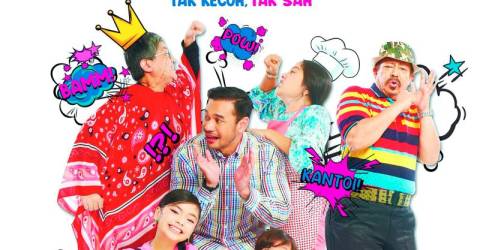 TO keep the whole family entertained throughout the month of January, Astro has put together a whole host of programs from different genres ranging from animation, comedy, fantasy and edutainment from now to January 19th on Astro Ceria, Xiao Tai Yang, Vaanavil, Cartoon Network and Nickelodeon!

In the spirit of the times, Astro is premiering a new series entitled FamILY, with which many Malaysians can identify. The eight-episode program, which airs every Monday at 9 p.m. starting January 4, tells the story of Shahir, a contractor, his wife Marissa, a housewife, and their children Qalisha – a wannabe social media influencer and Iman, a toddler who under one roof with Shahir’s eccentric parents, Fatimah and Rahman, whose stay with the family is extended due to the Covid-19 pandemic.

Cecilia Wong, Head of Astro Ceria, says: “At a time when the world is hit by the COVID-19 pandemic, at Astro we understand the concerns of parents whose ultimate goal is to keep their children safe and healthy, especially with the increasing rate of infection in their respective areas. That’s why, as a pioneer of the country’s children’s entertainment channel, we’ve curated a wonderful selection of content for the whole family to enjoy. We hope our customers will remain entertained with our programs available immediately on television, the Astro GO app and on demand! “

Astro Ceria (channel 611 HD and 631 SD) has launched a variety of new content such as Geng Gajet, with new young talents such as Lion Chong and Alif Idham! Geng Gajet starts every Saturday at 9pm! Kids can also be immersed in the world of Ultraman Galaxy Fight: New Generation Chronicles, ‘transport’ to Japan with Tsurupika Hagemaru and Doraemon, ‘travel’ to Korea with The Tayo Movie: Mission Ace and enjoy excellent local animations such as Didi & Friends , Robozeta and SMK Animasi.

Also available on Astro Vaanavil (channel 201) are Motu Patlu and Baahubali the Lost Legends at 6:00 PM and 6:30 PM respectively. Every Saturday and Sunday, look out for Kalari Kids at 9:30 AM and Chota Bheem: Kungfu Dhamaka at 10:40 AM. These programs can be streamed through the Astro GO app and on demand.

Have fun with We Bare Bears (4pm) and The Amazing World of Gumball (9pm) every Monday through Friday on Cartoon Network (channel 615 HD and 635 SD)! Also, watch popular Adventure Time animated series every day at 10pm! For fans of Nickelodeon (channel 616 HD and 636 SD), watch SpongeBob SquarePants every Monday through Friday at 3pm and Avatar: The Last Airbender at 4pm! For some weekend fun, Lego Friends airs every Saturday and Sunday at 12:30 PM.

Priyanka Chopra and Nick Jonas share how her family cheered loudly during a gloomy moment at the wedding. Watch