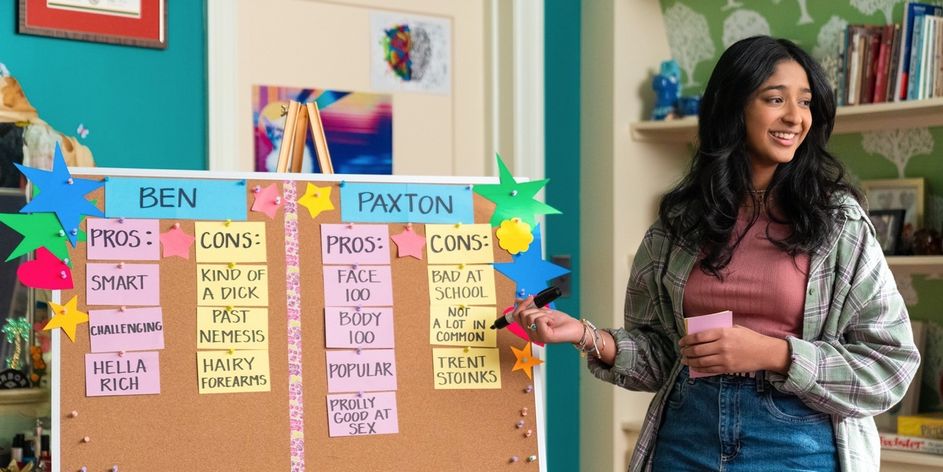 Warning: This post contains spoilers for Never have I everthe season 2 finale.

Never have I everThe Season 2 finale ended well for Devi, not so much for her longtime academic rival and once boyfriend, Ben Gross.

Both attended their school’s winter party, though not together; Ben accompanied his girlfriend, Aneesa, while Devi and her single boyfriend Eleanor decided to date each other. Everything seemed pretty chill until Paxton, who chased Devi all year – including when she and Ben were dating, oops! – showed up and told Devi that he wanted to be her husband after all. (He also hit her with his car, but it’s okay. She’s okay.)

As Paxton and Devi danced slowly, Ben muttered that Paxton had always been Devi’s endgame. But Eleanor, standing nearby and hearing him, corrected him quickly. She pointed out that Devi had been all in with Ben after he drove her to scatter her father’s ashes at the end of Season 1, but that she and Fabiola persuaded Devi to go after Paxton instead. And then the episode ended when a devastated saw Ben Devi and Paxton kissing on the dance floor. (Read a full summary.)

Jaren Lewison, who plays Ben, tells TVLine that shooting those scenes had a profound effect on him… but maybe not for the reasons you might think. 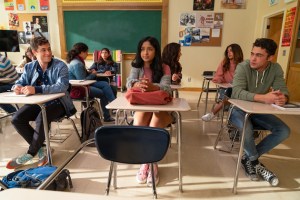 “I walked in and got goosebumps and I had trouble speaking, which is weird because in real life I’m super lazy and passionate,” he says. “Even now that I talk about it, I still get butterflies in my stomach because it felt magical. Seeing everyone dressed up, and the set decoration was beautiful and the lighting was so beautiful.” Add to that the fact that Ben’s devastated moment was Lewis’s final scene of the season — which isn’t obvious in an industry that often shoots out of order to maximize production efficiency — and the reveal had added punch.

“I just remember this tremendous sense of gratitude and joy to have the opportunity to be a part of such an incredible show, an incredible season,” he says. “And then, hopefully, get the chance to do that again and build on this world for Season 3.”

But what might Ben’s trajectory look like in a potential third season, given that he’s dating one amazing woman while clearly pining for another? And what exactly is Ben thinking the moment he discovers he wasn’t quite the underdog he thought he was? Read on as we get Lewison to dig deep into that devastating dance moment.

TVLINE | Let’s go back a bit: Do you think Ben has ever had feelings for another girl the way he has for Devi?
I think it’s hard to say. Devi… represents everything Ben is looking for. Ben is looking for someone who is really smart and confident and a little wild, who can push him and challenge him both personally and academically. And when you couple that with a foundation of so many years of rivalry that eventually culminates in a friendship, and they still have that special way they joke, and the ability to get back together at such a deep level because of how good they are. know eachother…

That way she’s really special, and that’s why he feels so strongly for her. It’s very hard for him to turn those feelings off and move on and get over her. I don’t think that’s something that just happens. And of course we see that especially at the end with that look, and Ben exclaiming how it’s always been Paxton, and then find out it’s has not always been Paxton. It messes with his head a bit. 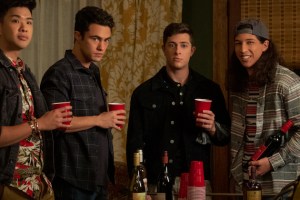 TVLINE | I wondered if Ben felt like he was second to Paxton all along, and if that played a part in the other choices he made during the season.
As cheeky as it may sound, I think Ben has been second all his life. He was second at home when his absent father always preferred his customers over his own son. He often feels second in school when he loses to Devi. He is second to his mother’s attention, who does various things while really being a stay at home mom and should be home supporting her son.

I think he feels like he’s been second-choice all his life, which is why it hurts him so much to see Paxton and Devi together — and also, early in the season, when he’s cheated on Aan. It’s so disturbing to him because he found somewhere he belonged, and he found somewhere he felt valued and valued when he felt unseen, unheard and unappreciated his whole life.

TVLINE | We see Ben comforting Devi in ​​the school bathroom after Paxton rejects her in the hallway, and it’s a sweet moment. Do you think he’d be okay with them just being friends again?
Yes. I mean, I think Ben will always have a soft spot for Devi, and Devi will always have a soft spot for Ben, and I don’t even think he necessarily ruled out the possibility of another romantic relationship a little bit later down the line. Their connection is so strong. It’s so obvious they have this attraction to each other because no matter what, they always seem to find their way back to each other, whether it’s Ben in Season 1 going to Devi’s house when he needs it most, or at the end of the season 1 finale where Ben Devi drives to Malibu, and then, in season 2 with Ben in that bathroom scene for Devi, and then Devi is kinda always there to pick Ben up again, even sometimes when she the cause of some of his pain.

You can’t fight that to a degree, and I think Ben knows that. He feels it. He often thinks of Devi, whether as a friend or something more. Again, I don’t think he can turn those feelings off so easily and so quickly.

…If we have that season 3, which, you know, of course, I really hope we get that chance. Who knows? I have no idea how he will eventually deal with that inner conflict. Those emotions were obviously a bit unconscious to him, and then they surfaced, and he’s going to have to figure out how to deal with them.

Claws Season 4: A Comedy Tale of the Time