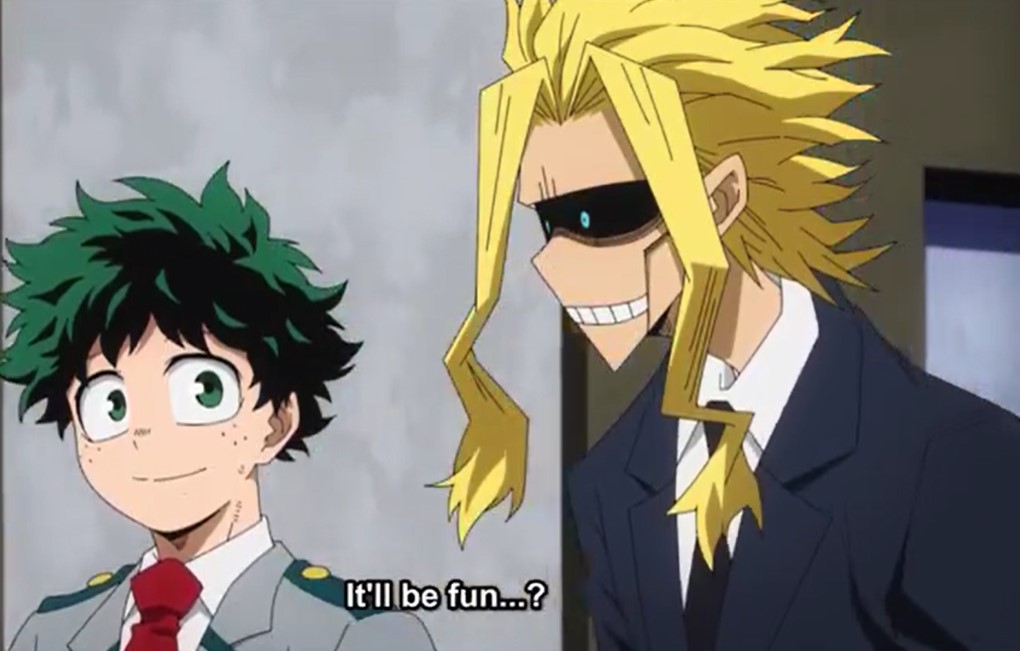 Izuku was recently teleported to the remnants world where he saw all of One For All’s heirs. He couldn’t speak or move, and he witnesses All For One talking to his young brother. They talked about metta people that All For One has liberated. All For One reveals that he will create an army that will cause destruction. All for One younger brother reveals that a new hero will rise and stop him. After he finishes talking, All For One’s younger brother tries to hold on to Izuku’s hand but disappears.

Izuku wakes up in the real world to find his hand glowing with the power of One For One All. He gets out in the middle of the night, trying to calm his mind after what he’s been through. Izuku realizes he couldn’t fall asleep and decided to jog to make his body tired. He realizes that Yuga has questioned him about what just happened and he has hidden the truth. Izuku realizes it’s not a dream that his hands have come into contact with All For One’s younger brother.

All Might listened as Izuku reminded him of what he said at the sports festival. All Might puts his hand on his chin and wonders what happened to make the first wielder talk face to face with Izuku. He notes that he has never experienced this in his life. But he can tell Izuku what his master told him. All Might reveals it’s a phenomenon that only happened to Izuku.

All Might remembers being with his master, who told him it is not a dream. They are in remains. That day, the mighty asks his master what she meant by remains. Nana reveals how One For All Quirk works and how they cultivated it. That day, Nana told All Might that even if they all die, they will meet One For All again. Izuku notices that All Might is daydreaming.

He calls out the name of All Might; he could all jump out. All Might asks Deku if he said he accidentally used One For All and wakes up. Izuku said yes, and All Mighty notes that he is glad Izuku is not in pain. But he is curious about its individuality. Izuku notes that he wonders if it has anything to do with the Quirk singularity doomsday theory from parent to child.

Izuku reveals that the Quirks blend and evolve as they are passed down from generation to generation. According to the theory, a powerful Quirk will one day arise. The Quirk will have an overwhelming power that no one will be able to control. All Mighty asks Izukuif if there is anything else. Izuku reveals that there were two successors he couldn’t see properly. All Might notes that they will continue to investigate this matter until they find the truth.

My Hero Academia Season 5 Episode 4 will release the latest new episode on Saturday, April 17, 2021 at 5:30 pm. My Hero Academia is available online at AnimeLab, Crunchyroll, and FunimationWatch the preview below.

Do you laugh? Check out these side-splitting comedies on Netflix – FilmyOne.com