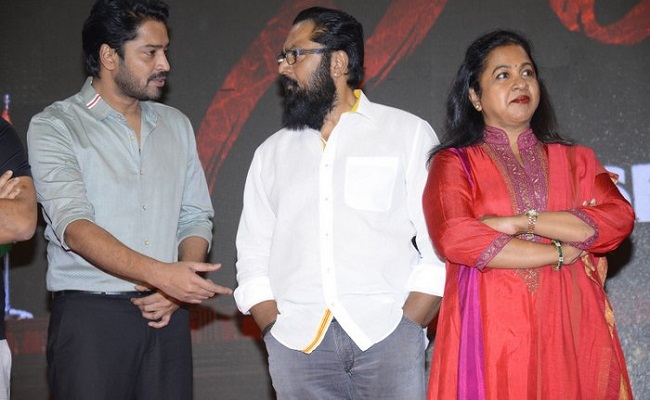 Allari Naresh played an intense role in his next outing Naandhi, directed by Vijay Kanakamedala.

Featuring Navami as the female lead and Varalakshmi Sarathkumar in a major role, the film will hit the screens on the 19th of this month.

Today the Naandhi pre-release event will be held in the presence of the entire cast and crew. Radhika, Sarathkumar, Harish Shankar and Prashanth Varma graced the occasion as special guests.

Radhika said, ‘It will bring good luck if I come to Hyderabad. First thing I said to Varalakshmi, ‘please do Telugu movies. They will treat you like a queen. ‘The film looks very interesting. “

Sarathkumar said: “The trailer assured that the movie is going to be a hit. Through Naresh’s dubbing we learned from him how to dub differently depending on the situation. The trailer looks very good. Varalakshmi grew up alone. I have not recommended her for any movie. “

Varalakshmi said, ‘I have to thank all the love for the role of Jayamma. Krack is an eye opener for me. I thank Vijay for providing this role in Naandhi. It’s completely opposite to Jayamma’s role. It has a lot of scope for performance. It’s great working with Naresh. “

Allari Naresh confirmed that he will continue to make comedy films.

“Although I make several films, my number one priority is making comedy films. Everyone worked really hard for the movie. Varalakshmi is very energetic on sets. After a long time I got a tall actress (Navami).

I will be making content rich movies from now on. This movie has all the elements like comedy and serious emotions. We are giving a good report with the film, ”he added.

How to Watch ‘Stanley Tucci: Searching for Italy’ Online On Demand