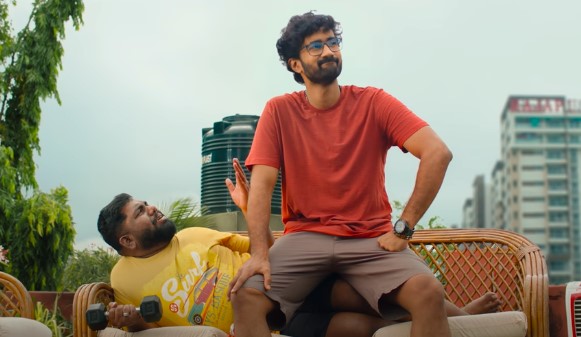 Santosh, also known as Santu (Santosh Sobhan) and Paddu (Mehreen Pirzada), are colleagues in a software company. They have been in a relationship for three years, but none of their family knows about it.

Gopalam (Ajay Ghosh) is a lucky man with a weakness. He has tremendous fear and a weak heart. What happens when he starts to believe the jealous neighbors’ words and creates problems for himself and his daughter? How he overcomes the fear of “fear” is the basic plot of the film.

Santosh Sobhas is perfect for the role. However, there is nothing in the role for him. There are a few obligatory love comedy scenes and a sermon sequence at the end. He is in good order in everything and also makes a few moves well. And yet it leaves no trace and is forgettable. The different ingredients used should give him the confidence to be a more commercial hero. That is the only positive of Manchi Rojulochaie.

Maruthi directs the film. He is now a brand looking for an opening. It also means that there will be high expectations of him. Manchi Rojulochaie is another formula of his that is reminiscent of his earlier attempts.

From the opening it is clear that Maruthi is taking it easy here. It’s a simple setup with limited characters and long scenes. The whole setting, staging and content is reminiscent of the director’s pre-Bhale Bhale Magadivoi days.

The first hour feels like a long extension of a single sequence. It makes the whole thing repetitive and ‘small’. What works then is the writer’s sporadic moments of comedic brilliance in Maruthi. They are exaggerated and have ambiguity, but some of them come off as hilarious.

On the other hand, the romance between the main couple is boring. It pulls the momentum and energy down when it arrives. The same goes for the drama, which feels overdone every time.

The pre-interval and interval block add to the chaos and frustration. It is therefore a relief when the break comes. The lack of connection to the drama is due to the repeated emphasis on the characterization and theme chosen for the story.

One starts the second half journey with a lot of fear in mind and remembers the sequences before the break. However, things are not as bad as one might expect. The story is much more alive, even if it takes a predictable route.

Again, the focus is all on the father and his fear. A few strip blocks, one in the hospital, another a first half extension, work well. It seems that Maruthi is back on track.

Everything seems to be going well until a major roadblock is hit in the last half hour via ‘corona’. The story then becomes a chore and suddenly the tone changes into serious drama. It’s drag to the end where a neat message is passed on by the hero.

All in all, Manchi Rojulochaie has a neat message, but the whole package is half-baked. Except comedy in parts, the other emotions don’t work and play spoilsports. Check it out if you want some comic relief with a message at the end. But don’t expect anything convincing.

Mehreen Pirzada is seen after a hole in the screen. She has lost some weight, which is good, but there is no change in her acting. She still makes an irritated face because of all the emotions that don’t make her smile.

The real hero of the movie is Ajay Ghosh. He gets a main character who controls the whole story. He’s genuine and serious, but you can’t help but feel if it’s over the top and loud. However, it has more to do with the direction and the character than with his act.

Among the rest, PD Srinivas and Koteshwara Rao unexpectedly get bigger roles. They’re okay because the part just requires jealous neighbors. Vennela Kishore is used briefly while Srinivas Reddy is wasted. Praveen is good with a hilarious (part) song. Harsha and Sudarshan are fine.

The music of Anup Rubens is okay. A few songs are nice to hear, but lack the on-screen appeal. The background score corresponds to the loudness in progress. The cinematography is subpar in a few sequences. The editing could have been better. The writing speaks for itself, with a few comedic punches that turn out well.

Parts of the second half

A more developed romantic thread and a smooth integration of sentiment would have heightened the proceedings.

Are you going to recommend it?

Balakrishna’s Akhanda Movie, Cast and Crew, Trailer and Other Details