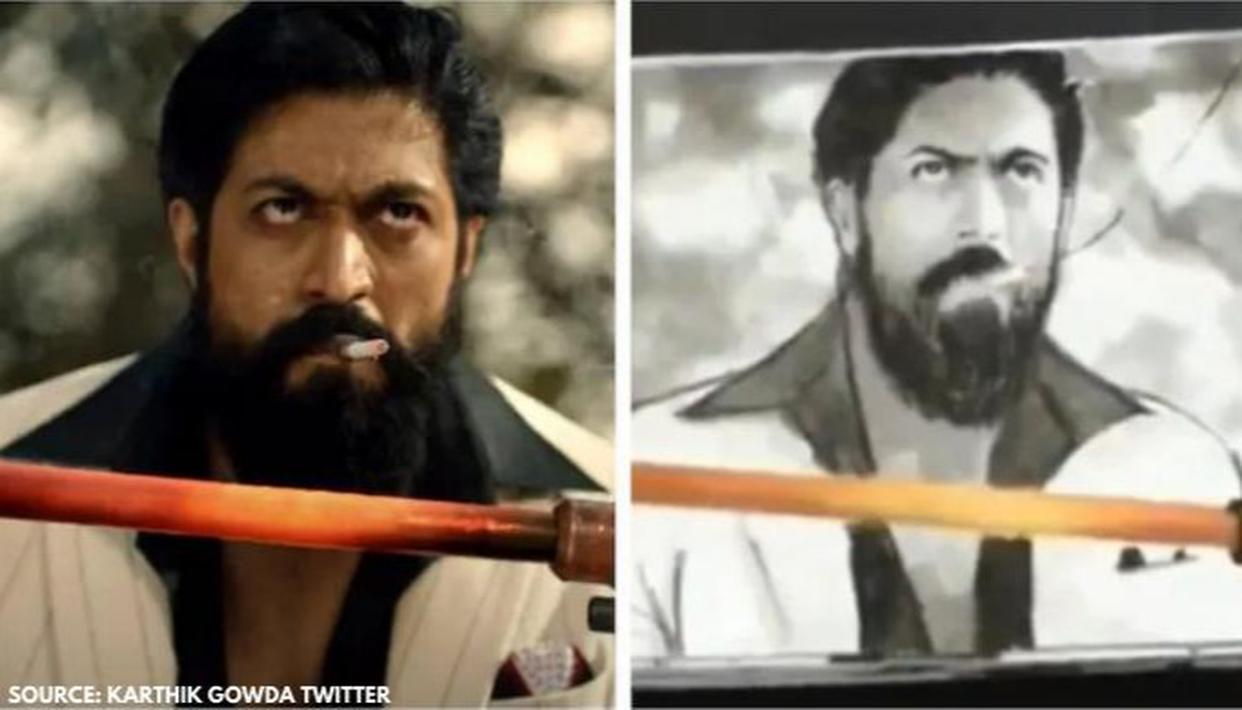 Sandalwood star Yash eagerly awaits the release of his upcoming movie, KGF: Chapter 2, will hit theaters this year. The makers of KGF: Chapter 2 revealed the film’s teaser amid much fanfare. The big budget movie also stars Sanjay Dutt, Raveena Tandon and Srinidhi Shetty. Recently, film producer Karthik Gowda took to Twitter to share a video of a fan who created a ‘flip art’ with 100 drawings and part of the KGF: Chapter 2 teaser. View the fan art here!

Recently, a Twitter user shared a video of a small fan doing a flip art of it KGF: Chapter 2 teaser. The flip art was made with 100 drawings. Sharing the video, the Twitter user wrote, “Flip art with 100 drawings # KGF2 #KGF @TheNameIsYash hope you like it .. from suriya fans @prashanth_neel #yash.” Producer of KGF, Karthik Gowda, took to Twitter to give a shoutout to the artist who came up with the flip art of KGF: Chapter 2He posted the video and wrote: “Beautiful workman …. Just brilliant”.

The fans of Kannada actor Yash grew many times after his movie KGF: Chapter 1 decorated the screens in 2018. The film became a blockbuster and the makers are now working on the sequel, KGF: Chapter 2The teaser for KGF 2, released by creators last month, became the most trending video that day, with 165 million views and 7.8 million likes on YouTube.

On January 30, Hombale Films, the production house behind the KGF franchise, took to social media to announce the release date of the sequel. According to the makers KGF: Chapter 2 will be released in cinemas worldwide on July 16 this year. In addition to the release date, the makers also shared a new poster. Hombale Films’ official Twitter handle wrote, “# KGFChapter2 Global Cinema Release on July 16, 2021. # KGFChapter2onJuly16.”

KGF: Chapter 2 is directed by Prashanth Neel. The film stars Yash, Sanjay Dutt, Raveena Tandon, Srinidhi Shetty, Prakash Raj and Malavika Avinash in the lead roles. While Yash reprises the role of Rocky, Sanjay Dutt will be seen as Adheera, the villain of the story. Being the most expensive Kannada movie with a reported budget of Rs.100 crore, the movie will also be released in Tamil, Telugu, Hindi and Malayalam.

17 Movies You Can Watch With Your BFFs On Galentine’s Day, On Netflix, Amazon Prime Video, And Disney + Hotstar