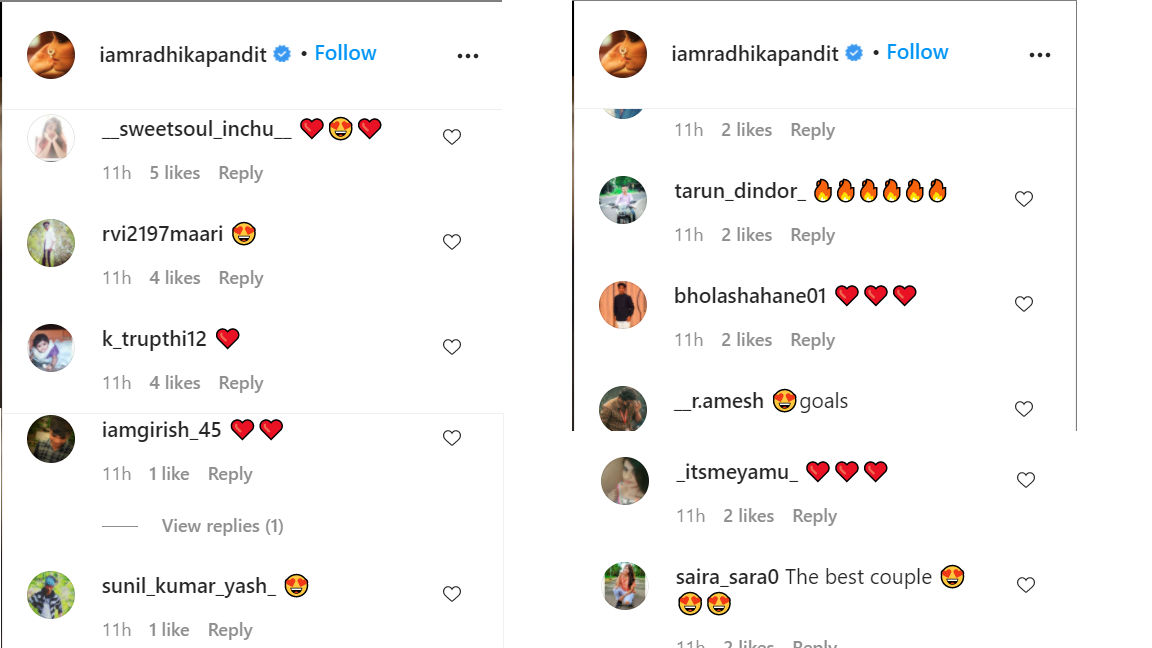 KGF ‘s Yash and Radhika Pandit are one of the most sought after couples in the Telugu film industry. They are called ‘matching goals’ and have many followers and fan clubs dedicated to them. Yash married his longtime girlfriend Radhika Pandit after being madly in love for several years. The couple are also blessed with two adorable children who are ten months apart. On Valentine’s Day, Radhika had a very sweet message on her social media for her sweetheart as they spent their Valentine’s Day together.

Radhika took to Instagram to post a photo of the couple, leaving her 1.5 million followers in awe. In the photo, Radhika and Yash are lovingly looking at each other with smiles on their faces. Along with the photo, she wrote: “With a smile you gave me … Happy Valentine’s (black heart emoji) #radhikapandit #nimmaRP.” Check out the image below:

Also read: KGF’s Yash enjoys vacation with his kids; Says ‘Water and sand have never given me so much pleasure’

The couple’s fans were delighted to witness the love between the couple and quickly commented on the photo. The fans shared their love for the couple by flooding Radhika’s comment section with heart and fire emojis. Many users wrote “goal setting” in the comments. Check out some of the comments below:

The couple first met on the sets of the television show Nandagokula in 2004. They didn’t get along right away, because Radhika thought Yash was rude and full of attitude. However, they got the chance to work together again and worked together in films like Moggina Manasu and DramaThey quickly became good friends.

In 2000, Yash expressed his love for Radhika on Valentine’s Day by giving her her favorite things and later proposed to Radhika over the phone. It took the actress six months to say ‘yes’ to the marriage. The couple eventually became engaged in 2016 and married in December the same year. The couple are the parents of two children, a daughter, Ayra, and son, Yathrav. Radhika and Yash often post photos with their children on Instagram.

Also read: Remember KGF’s Yash was dragged by the fans of Kiccha Sudeepa on a challenge?

Also read: “KGF” actor Yash flies to the Maldives for a family vacation; Have a look at the pictures

Facebook is working on Smart Watch to compete with Apple Watch