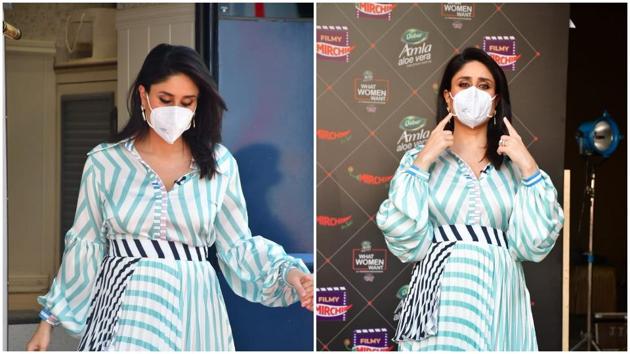 Kareena Kapoor has started shooting for a new season of her radio show What Women Want. On Sunday, she posed for the paparazzi outside the shooting location, while careful to stay safe from the coronavirus infection.

Actor Kareena Kapoor is filming again for a new season of her hit radio show What Women Want. The actor, who is expecting her second baby, shared a photo of the shooting of the first episode with journalist Barkha Dutt.

In the photo, Kareena was seen in a white and blue dress and she was rocking her tummy. She stood next to a television screen showing a live video conversation with Barkha. She shares the photo, writing, “With none other than @ barkha.dutt … what an honor to turn the tables … my most favorite episode … season 3 … is coming.”

Outside the shooting location, Kareena also posed for photos for the paparazzi. She stepped out of her trailer wearing a mask to protect herself and others from the corona virus. When the photographers asked her to come closer for the photos, Kareena asked if they wanted her to take off her mask. Then she realized that the photographers were not wearing their masks and said clearly, “Head mask nahi utaarugi (I will not take the mask off).” However, when her assistants told the photographers to put on their masks, she took off her own mask for a few seconds to give the paparazzi some nice photos.

This is not Kareena’s first job in the midst of the coronavirus pandemic. Previously she was in Delhi shooting her movie Laal Singh Chaddha with Aamir Khan. She stayed at the Pataudi Palace with husband Saif Ali Khan and son Taimur and completed her portion of the shoot for the film. Kareena shared a photo with Aamir from the sets and after completing the shoot, wrote: ‘And all journeys must come to an end. Today I wrapped up my film Laal Singh Chaddha … troubled times … the pandemic, my pregnancy, nervousness but absolutely nothing could stop the passion with which we shot, with all the safety precautions of course. Thank you @_aamirkhan and @advaitchandan for an intense yet poignant journey … thank you to my most amazing team @avancontractor, @teasemakeup, @makeupbypompy, @poonamdamania and all the crew … @ nainas89 you were missed. Until we cross again. “

Kareena was also going to work on Karan Johar’s Takht, but the film is on the back burner due to the pandemic. It also stars Ranveer Singh, Alia Bhatt, Vicky Kaushal, Bhumi Pednekar and others.