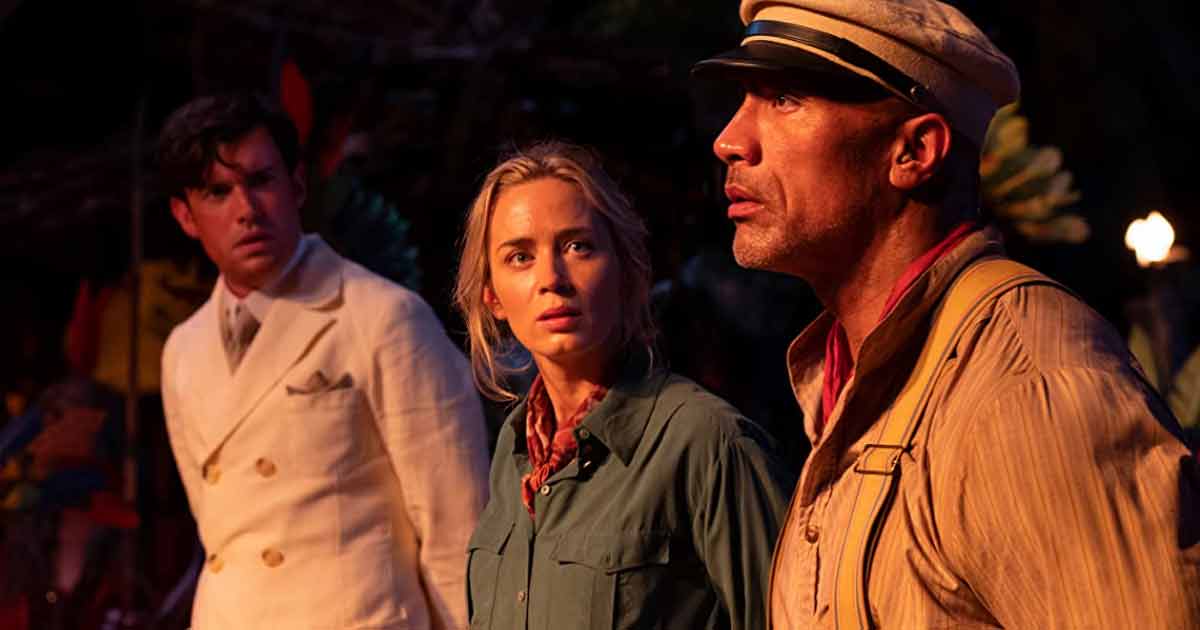 What is good: It’s The Rock bragging its power to mere mortals in a rainforest, seen it before and it’s still entertaining!

What’s bad: It takes you on a ride you’ve been on before, albeit in parts, in several of other treasure hunt movies

loo break: It’s a jungle out there, even if you don’t need it

To watch or not?: Only if you’ve seen previous ‘Rock in a jungle’ movies and liked some of them

Starting with a flashback of 1556, we see Don Aguirre (Édgar Ramírez), a Spanish conquistador with this troop trying to reach the Lágrimas de Cristal tree. It is believed that a petal of this tree cures all diseases and lifts every curse, hence Aguirre wants to save his sick daughter. Things don’t go well and they get stuck like a curse that never allows them to leave the sight of the Amazon River.

450 years later we see Dr. Lily Houghton (Emily Blunt) escape with a recently acquired artifact, which could support her years of research to prove that the petals of Lágrimas de Cristal can be life-saving. She gets help from a mountain of bad jokes in cruise ship skipper/adventurer Frank Wolff (Dwayne Johnson). In a ‘you see it from miles away’ twist, he’s also looking for the same tree that clears the way for Lily to the end, because how else would they fall in love?

So, shortly after recreating almost every movie/cartoon of its own, Disney decided to take a different route this time by making a movie about its theme park ‘Jungle Cruise’. Many of you will have already been on it (I guess that’s why you’re here or it’s because IFFFFFFF SMELLS YOU…yeah, you get the idea), but for those of you who haven’t yet, it’s actually a zoo on the water but with not the real animals/birds. You get on a boat, listen to the skipper’s silly jokes and see some (not real) animals lounging for a few minutes.

About the same thing happens here, but it takes more than two hours. The above is of course a hyperbolic statement, but since the real Jungle Cruise gives you a ride around inanimate animals and this story too (by John Norville, Josh Goldstein, Glenn Ficarra, John Requa) goes by without justifying the large scale, awe-inspiring images . This could be a perfect idle snack munching watch for many, but I’ve been on enough jungle rides to recommend this one.

Starting with the analysis of our protagonist in his Frank-style character – ‘The Rock’ Dwayne Johnson’s puns are ‘some’ (because only a few of them are bothersome, some even the worst). Both its protagonists (Dwayne & Emily Blunt) are perfectly imperfect in the roles they play. Why? They individually accomplish the things for which they are hired. They both lack the fire needed to get this cruise’s engine up and running.

It’s a tailor-made role for Dwayne Johnson as he is this pioneer of entertaining ‘jungle’ movies and he’s good at his part. The same goes for a very determined Emily Blunt, who expresses a whole range of emotions without necessarily dressing for the occasion and she is stunning. But when they team up with Jack Whitehall who plays Emily’s brother, it’s very hard to decide who the real siblings of the three are.

Édgar Ramírez as Aguirre is covered in a layer of VFX tree parts, guzzling a lot of junk. He is reasonable. Jesse Plemons as the evil German royal family is the victim of a confused character sketch. He’s lamely funny at times (like asking a bee to help him navigate to the life-saving petal) and then there are times when he’s kind of “out for blood,” “not a funny thing.” Why wasn’t he funny before putting that burden on Johnson?

Jaume Collet-Serra surprises with his polished attempt at such a visually majestic subject, after all, he is known for scaring people away with his horror films. In the second half of the film, he regains his chilly whiff of panic surrounding the plot. He even lets his leads breathe the air of love for a while by recording an adorable moment of Frank capturing Lily on her vintage camera. But the story just limits him to making this more than a run of the mill jungle scavenger hunt movie.

Let’s talk Metallica first, as Disney takes full advantage of the repetition of Nothing Else Matters by even supporting its famous castle intro. James Newton Howard knows this space and can therefore even brighten up some dead scenes with his pumping orchestral music.

All said and done, this is a highly predictable sea treasure hunt with a slow love story of two mismatched adults who are forced to fall in love, because why not?