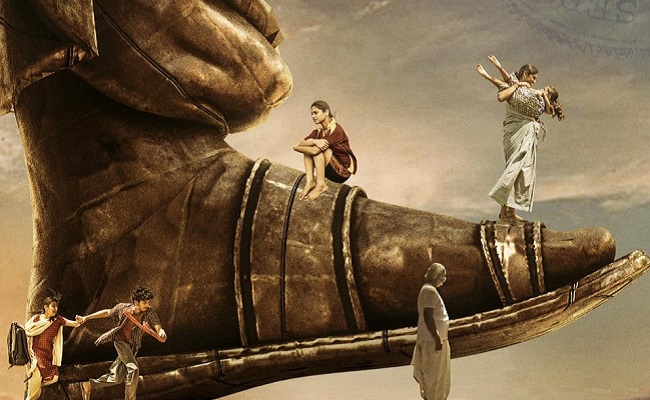 As the theaters remained closed during this pandemic, streaming companies are releasing small movies on their platforms. The newest is ‘Johar’.

To continue the legacy of his father who ruled the state for years, a young prime minister of Andhra Pradesh (Chaitanya Krishna) decides to install the world’s tallest statue.

The cash-strapped state requires Rs 3000 crore to build the statue. To mobilize funds for his passion project, he is decreasing the allocation of funds to various welfare schemes.

How the CM’s decision affects the lives of poor people, such as a teenage runaway couple (Esther Anil and Ankith), an idealistic hostel owner (Subhalekha Sudhakar), a poor Uddanam woman (Eeswari Rao) whose daughter is diagnosed with kidney disease, and a poor athlete (Naina Ganguly)?

Esther Anil and newcomer Ankith fail to impress. Naina Ganguly as a circus girl who wants to become an athlete is ok.

Indian commercial cinema has witnessed two styles of political film storytelling, one popularized by Shankar and Murugadoss, and the other a hard-hitting realistic approach to great off-beat filmmakers.

“Johar”, a new political-themed Telugu film with a current point of statue politics from debutante director Teja Marni, does not walk either path.

The point in the discussion here is quite relevant, but the narration is where the movie falters.

Aside from that ideological zeal, the director seems to have a poor understanding of Indian politics and governance. It is not entirely convincing how the CM’s decision on image politics affects different parts of people, except that it serves to portray the plight of the marginalized people.

Why does the CM expect money from the ‘centre’ for a sculpture project? Does a CM share their political plans behind a particular project during a meeting to the entire group of officials? The conversations between CM and his advisor also sound completely out of reality.

In addition, the entire thread of teenage lovers (a chai-wala and the daughter of a prostitute) running from Varanasi to Rajamundry is proof of clichéd writing. A freedom fighter who met Subash Chandra Bose in the 1940s still runs the hostel for poor children. And what would his age be now?

The conversation scene between a CM and a journalist is another example of the director’s unrealistic approach.

Implementation and a better understanding of politics are just as important as good intentions. This is missing here. The narration with the hyperlink stories does not add much novelty.

While we can all agree that governments are increasingly indulging in projects that bring political gain and spending money on unproductive plans, this point needs a more mature narrative.

All in all, “Johar” is a preachy political satire with few trade-in points.