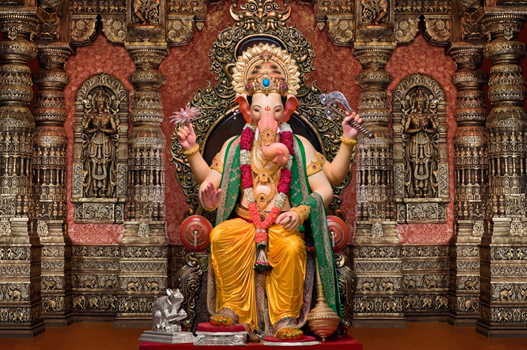 mumbai is known for its extravagant show of pomp and circumstance during the celebration of the puja of God Ganesha or Ganpati. This festival is known locally as Ganesh Chaturthi. Considered as the most important festival for the Mumbaikars, the Lord reigns supreme in the life of the people of the city every day and every time. This special mega event marks the coronation of the King of Kings, the Lalbaugcha Raja or the Emperor of Lalbaugh.

The most notable of the countless Ganesh idols is the deity of Ganpati in the Lalbaugcha Raja Sarvajanik Ganeshotsav Mandal.

A prominent place in the metropolis, Lalbaug is known more for its Ganesh Chaturthi festival than for its rich industrial heritage. The idol attracts dozens of devotees due to the popular belief that it fulfills all desires. Therefore, the deity is called Navsacha Ganpati. The idol is exhibited during the ten long days of the Ganeshotsav festival and is then immersed on the auspicious day of Anant Chaturdashi.

To speak about the history of the Lalbaugh ka Raja, the mandal was mainly erected in the year 1934, as a vow or Navas to build the Lalbaug market on the existing place, then known as Sarvajanik Ganeshotsav Mandal, Lalbaug and was subsequently re-named for its later form. Formed at the height of the freedom struggle, it was the brainchild of Lokmanya Tilak to organize massive Ganpati pujas for the upliftment of the hanging morale of the freedom fighters and to wake up the masses. It is from here that the mandal takes up the problems of society on a regular basis with the utmost seriousness. After the murder of Bapu Gandhi, the Ganesh idol received a metamorphosis similar to that of the Father of the Nation.