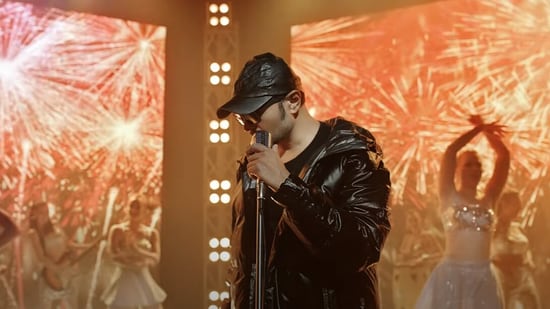 The title track of Suroor 2021 became an overnight sensation. It reached 68 million views and 40 million audio streams, making it a blockbuster for musical genius Himesh Reshammiya. While the video was praised for its concept, acting and introducing new talent, it ended on a somber tone with a puzzle in mind.

The love story of the rock star lost in love will come to the fore with the album’s second track, aptly titled, Terre Pyaar Mein.

The title track of Suroor 2021

The rock star played by Himesh himself does not understand why the lady love left him, and he longs for her to come back. Recorded in a breathtakingly beautiful way during a huge outdoor concert of the forts of Rajasthan, the Suroor girl will be revealed on August 20 when the song is released worldwide.

Himesh, the man behind it all, confirms that after the blockbuster reaction to the title track, Surroor 2021, this song called Terre Pyaar Mein is a pure and all our romantic track.

Himesh says, “There are love stories that have a happy ending and there are those that don’t. The ones that end abruptly or sadly are the ones that touch your heart. That’s what Terre Pyaar Mein is all about, those unfinished stories that didn’t end with the couple running away toward their happily ever after. While shooting for Terre Pyaar Mein I connected even more deeply with people who have unfinished love stories and realized they never get a closure”

Himesh Reshammiya’s music label has released 3 super hit albums and 5 songs so far with the title of Sanseinn, Tere Bagairr, Terri Umeed, Dagaa and Suroor 2021 as the title track. The response to all 5 songs has been overwhelmingly super successful with a combined 200 million views, more than 65 audio streams in just 6 weeks since launch, which is a milestone in itself.

The challenge season 37 episode 3: Is Corey L. Michele at risk?