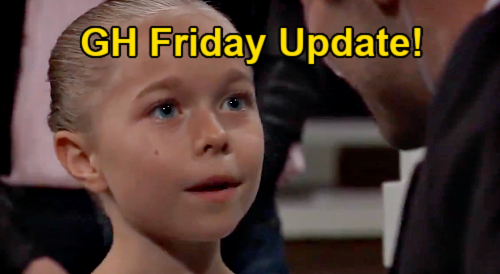 General Hospital (GH) spoilers update for Friday, June 18, teases that Brook Lynn Quartermaine (Amanda Setton) will have a baby freak-out as a new clue emerges about Peter August (Wes Ramsey). We’ll also see a bittersweet bond between Violet Finn (Jophielle Love) and Harrison Chase (Josh Swickard), so a lot will happen as the week winds down.

First on Friday’s episode, Maxie Jones (Kirsten Storms) will reach a place of utter despair. She will call Brook Lynn and insist to speak to Louise August aka “Bailey Quartermaine” (Harper and Scarlett Bloom), but Brook Lynn will sound the alarm.

Of course Brook Lynn will think the last thing Maxie should do is cling to “Bailey” and help everyone connect the dots.

After Brook Lynn lectures Maxie about the dangers of being near “Bailey,” she will push Maxie not to ruin their plot with a careless move. Maxie will begrudgingly back off, but she will still miss her daughter and long to be close to her.

Soon after, Sam McCall (Kelly Monaco) will go to Maxie’s house with questions about the CCTV footage in Pautauk. Maxie’s story doesn’t match what was captured in that video, so Sam will urge Maxie to explain why.

Maxie has indeed lied to Sam and Dante Falconeri (Dominic Zamprogna), but she’ll have to fix this by piling up even more cheating. Maybe Maxie will pretend she was too exhausted and too emotional to remember.

Maxie can change her story based on the security footage and claim she’s thinking more clearly now.

Sam will still seem suspicious if Maxie tries to sell this new version of events. She won’t understand why Maxie would want to hold back when a missing child is in danger.

Maxie has to shut up about her baby plan with Brook Lynn so Sam will walk away without all the answers she needs.

As for Maxie, her desire to see Louise will only grow stronger. See if Maxie ignores Brook Lynn’s wishes and pays a visit to the Quartermaine mansion over the next week.

Meanwhile, Dante and Austin (Roger Howarth) team up in the Pautauk Forest. There will be an area that has not yet been searched, so Austin will draw Dante’s attention to it.

Things will take a surprising turn when Austin slams Dante and tries to throw him to the ground.

It will be a sneak attack as Dante will turn his back. Austin is a strange guy who is obviously hiding some secrets, but it doesn’t look like this will be a nefarious move.

We might see Austin pushing Dante to make sure he stays out of a dangerous situation. There’s even a chance Austin will be momentarily mistaken about Dante’s identity.

Anyway, Austin won’t be thrown in jail for assaulting a cop, so we have to believe this is some kind of misunderstanding.

Then Anna Devane (Finola Hughes) sets out to find out more about Peter and his location. Peter’s body was stored in the freezer of the sub-basement lab in GH, but Anna will continue to monitor the helicopter corner on Friday.

Anna will give Valentin Cassadine (James Patrick Stuart) a new clue, so that could mean grilling the pilot who was originally supposed to pick up Peter.

Brick (Stephen A. Smith) returns on Friday’s episode, so he has some advice for Carly Corinthos (Laura Wright) and Jason Morgan (Steve Burton). In addition to Brick’s surveillance expertise, he also has some advice on avoiding another mafia fight.

It’s just not a good idea since Carly and Jason literally just ended one with Cyrus Renault (Jeff Kober).

However, this can be beyond Jason and Carly’s control, especially if there are dark forces at work. We could see the Novak family hunting the Corinthos organization if they feel it is weak.

Either way, it’s worrying that shipments and drivers are starting to disappear. This is a crisis that could get worse, so Carly and Jason will need to get to grips with it ASAP.

Other General Hospital spoilers say Violet will be oblivious to the bleak side of Chase’s big day. Chase will manage to don a suit for his wedding to Willow Tait (Katelyn MacMullen), but he will still fade quickly.

Violet will think Uncle Chase is lucky to get married – and he won’t disagree, as he loves Willow with all his heart. Chase also adores Violet so he may choke as this could be one of the last moments he has with his niece.

Fortunately, Hamilton Finn (Michael Easton) has a plan to save Chase from the fatality that awaits. Once the new paternity test results are in, they let Finn know he was right.

Finn can continue to finish this new course and eventually administer it.

Elizabeth Baldwin (Rebecca Herbst) may want to let Finn know that she’s put out an Anna fire, but she’ll soon realize he’s got something else on his mind.

Finn will be excited about this breakthrough in healing, so he’ll explain that he needed a DNA sample from Chase’s real father – which is Gregory Chase (Gregory Harrison).

Willow Tait (Katelyn MacMullen) will be busy preparing for her GH wedding, so she gets some last-minute help from Sasha Gilmore (Sofia Mattsson) and Jackie Templeton (Kim Delaney).

Sasha will only talk to Willow, who will try to stay strong and focus on making this sacrifice for Chase’s sake.

Willow will believe she’s doing what’s best for Chase – and Sasha should agree that his last night will be special.

It looks like Chase and Willow will tie the knot before Finn can produce the cure, so that should pose a marriage dilemma if Chase eventually survives!

We will provide updates as other news becomes available. According to General Hospital spoilers, Michael Corinthos (Chad Duell) will also end up in this mess, so stay tuned. CDL will have plenty of other great soap spoilers, updates and news, so stop by regularly.