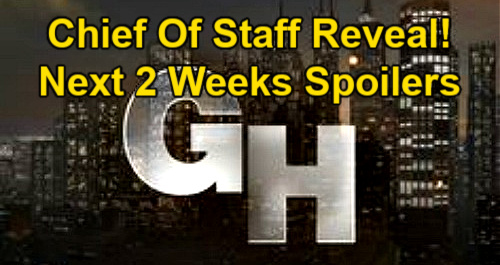 General Hospital (GH) spoilers for the next two weeks, July 19 to July 30, tease that Sam McCall (Kelly Monaco) will be looking for Hayden Barnes’ (Rebecca Budig) shooter – and there will be a big reveal by a chief of staff. Shawn Butler (Sean Blakemore) will also walk free while Hamilton Finn (Michael Easton) makes a confession to Peter August (Wes Ramsey).

In the week of July 19-23, Maxie Jones (Kirsten Storms) will enjoy a final visit with “Bailey Quartermaine” aka Louise August (Harper and Scarlett Bloom) before her trip to Texas.

Speaking of Valentin, it looks like he will be coming to Anna Devane (Finola Hughes) along with David Hopkins.

That’s Peter’s pilot, who might need to learn a lesson about how to treat women. Fortunately, Anna comes one step closer to home to uncover the truth about Peter.

Dante Falconeri (Dominic Zamprogna) will receive updates on what Anna discovered in New York City – and shortly after, Anna will think she’s discovered the identity of who was last seen on the GH rooftop with Peter.

It sounds like we’ll see a sweet calm before the storm that brings Liz and Finn even closer.

As for Brando Corbin (Johnny Wactor), he will assure Sasha Gilmore (Sofia Mattsson) that his future is with her.

Apparently that means Brando is willing to turn his back on all the mob’s wishes and focus on his family.

With Shawn, he will learn that he will become a free man.

That will be great news for Shawn and his loved ones, but Nikolas Cassadine (Marcus Coloma) will be concerned about Shawn discovering who started Hayden Barnes’ (Rebecca Budig) shooting – and that’s Nikolas!

Spencer Cassadine (Nicholas Chavez) will have a close call when it comes to the stalker’s secret leak, but he must manage to cover for his father.

It looks like Trina Robinson (Sydney Mikayla) will find out who “Victor” really is, but despite her anger, she should get past his deception pretty quickly.

In the week of July 26-30, Trina will find the party! She’ll encourage Spencer to give Wyndemere a blowout, but that sounds like a recipe for disaster or at least some strange happenings surrounding the case.

We know that Spencer will soon be manipulating Ava Jerome Cassadine (Maura West) again, so more problems are to come.

Next up, Cameron Webber (William Lipton) and Josslyn Jacks (Eden McCoy) will throw Liz for a loop.

They’ll no doubt let Liz know that they’ve decided to get into a romantic relationship, so Liz will have to wrap her head around that surprise.

It turns out that another surprise for Liz is just around the corner – perhaps a much more horrifying one!

Finn will confirm to Anna that he was the one on the roof with Peter, so that probably means he also has to admit pushing Peter to his death.

Jason Morgan (Steve Burton) will also corner Liz for a showdown, so all of this could lead to Peter’s missing body.

Liz may turn to Jason for help, but realize the corpse is missing from the basement freezer! Anna could soon face that shock if this all goes as expected.

As for Shawn, he will be questioning Jasper “Jax” Jacks (Ingo Rademacher) about the disappearance of Hayden Barnes (Rebecca Budig).

Sam will also put her PI skills to good use by digging into the Hayden shooting mystery.

That news will make Nikolas uneasy and determined to keep his secret a secret anyway!

Monica Quartermaine (Leslie Charleson) will also let Britt Westbourne (Kelly Thiebaud) and Terry Randolph (Cassandra James) know who she has been selected as chief of staff.

Could Terry and Britt share the title and eventually become co-chiefs of staff?

Michael and Willow will have another conversation about whether they should continue to hide their true feelings, but they must agree that this is necessary for Chase’s recovery.