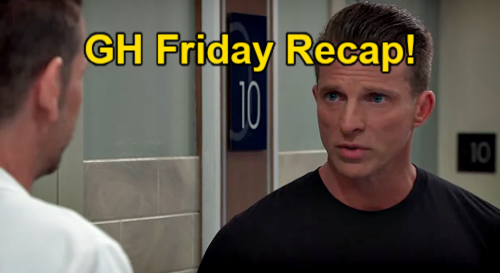 At the Metro Court, Jason told Carly Corinthos (Laura Wright) that while he thought Brando Corbin (Johnny Wactor) should focus on his family with Sasha Gilmore (Sofia Mattsson), he wouldn’t refuse Brando a mob job if he wanted to.

When Sam approached Jason and Carly, she complimented the “beautiful stone” the bride-to-be was wearing on her finger. Sam just wanted to talk to Jason about his upcoming wedding, so Carly stepped aside.

After Sam said she would let Jason break the engagement news to Danny Morgan (Porter Fasullo), she questioned Jason for his reasons.

Jason mentioned that Carly was his best friend and added that they both felt the loss of Sonny Corinthos (Maurice Benard).

Sam suggested that Carly and Jason were always first in line for each other, ahead of everyone else.

When Sam cornered Carly again, she acknowledged that this engagement wouldn’t have happened without good reason or if Sonny was still around. If there was anything Sam could do, she told Carly to let her know.

Sam met Maxie, who soon concluded that Sam had a new mystery man in her life.

This pleased Maxie, but Sam didn’t think her recent drunken kiss counted. Maxie disagreed, as it was the only one Sam had shared with anyone new since her divorce from Jason.

Before finishing the conversation, Maxie asked Sam to babysit Damian Spinelli (Bradford Anderson) while she was in Texas.

Ever since Ellie Spinelli (Emily Wilson) decided to move and Maxie took Georgie Spinelli (Lily Fisher) with her, Maxie worried that Spinelli would be all alone. Sam assured Maxie that she would offer support.

Back with Jason, he discussed Novak drama with Carly before saying he was on his way to see Monica Quartermaine (Leslie Charleson).

Jason kissed Carly on the cheek before leaving, which she seemed a little uncomfortable with.

Ned Quartermaine (Wally Kurth) realized Michael was talking about a charm offensive where they played nice with Austin, but Brook Lynn Quartermaine (Amanda Setton) thought the man was dangerous.

Ned grew suspicious, wondering what Brook Lynn knew about Austin that they didn’t. He saw no reason to see Austin as a terrible threat.

Brook Lynn did her best to cover as Nina went to the gatehouse, where Wiley Quartermaine-Corinthos (Erik and Theo Olson) was still napping.

Nina talked to Willow Tait (Katelyn MacMullen) while she waited and was touched to learn that Wiley’s parents were talking to him about his grandmother all the time.

They even had a tablet with Nina’s photo on it as part of a family album they showed Wiley regularly.

When Carly arrived, Nina was cordial and even congratulated her on the engagement.

At New York Methodist Hospital, a nurse led Anna Devane (Finola Hughes) into human resources before she could cross “Mike” aka Sonny.

Lenny eventually came back with his doctor after a scan, so Sonny realized it had revealed some bad news.

Lenny wouldn’t tell Phyllis Caulfield (Joyce Guy) just yet because she was chatting with a stranger. He urged Sonny to hold on to the hope a little longer for Phyllis.

Valentin assured Phyllis that Nina was a special lady and that he was happy with the help the Caulfields had given her in Nixon Falls. Phyllis told how “Mike” the bartender had also taken care of Nina.

When Phyllis got back together with Lenny and Sonny, she discovered that Lenny had more than just a bad heart. He also had cancer.

There was a mass on Lenny’s pancreas that was quite larger, but Sonny said there were treatment options.

Lenny refused to pile on Phyllis debts and stormed out, so Sonny called Nina to insist they all needed her. He hoped Nina was willing to come home to Nixon Falls.

Meanwhile, Sasha admitted to Brando that she had been aloof because of her concerns about the mafia. She now had someone to protect—her baby.

Sasha suggested that Brando was the kind of man she wanted to raise a child with, but if he was part of the Corinthos crowd or whatever, there would be no choice at all.

Sasha would only raise the baby if that was Brando’s call.

With Harrison Chase (Josh Swickard), he was discouraged because his only progress was being able to move his toes a bit.

While Dante didn’t think new love was involved, Chase felt his old partner should seek happiness if he could get it.

At GH, there was a lot of tension between Monica and Austin before Jason arrived. Jason personally informed Monica that he would investigate Austin for her. Then Austin ended up with Jason coming from the same illegitimate branch of the family tree.

Back with Anna in Manhattan, she discovered that the pilot was probably at Ryan’s Bar.

Anna wanted to go alone, but she gave in when Valentin insisted on being her wingman – as long as he did things her way.

If other GH updates come out, we’ll keep you posted. According to General Hospital spoilers, excitement will flare up in Port Charles.

CDL will have other sizzling General Hospital spoilers, updates and news, so check back soon.

ABCs Grey’s Anatomy: Why Season 18 Should Be The Last Of This Drama – FilmyOne.com