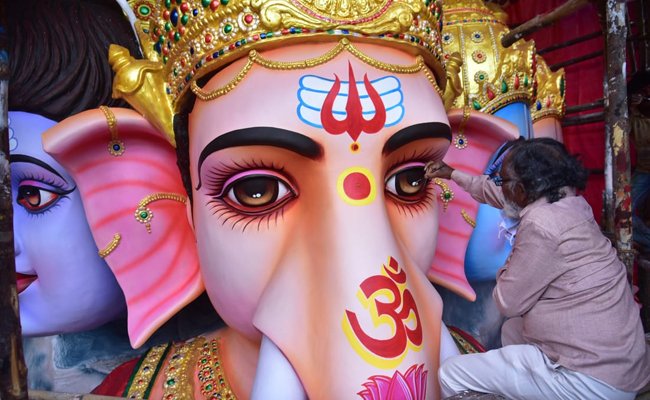 The verdict handed down Thursday by the Telangana High Court asking the authorities of the Greater Hyderabad Municipal Corporation not to allow the immersion of Ganesh idols made of plaster from Paris in the Hussain Sagar has ruled the government of K Chandrasekhar Rao in a difficult position.

If the government decides to strictly follow the ruling of the Supreme Court, it will face the wrath of Hindu groups, including Bhagyanagar Ganesh Utsav Samithi. If it ignores the court order, it amounts to serious contempt of court.

As there are only nine days left for the Ganesh Nimajjan, the authorities are waiting for a decision from the prime minister, who as usual has remained indifferent to the whole issue.

On Saturday, the Bhagyanagar Ganesh Utsav Samithi asked the state government to intervene and make arrangements for the immersion of Ganesh idols.

“We are waiting for the authorities to intervene. There is very little time left to arrange immersion,” he said.

The Samithi, who has worked for the past three decades to facilitate the organization of the Ganesh festival, said that the Ganesh puja and the submerging of idols were a matter of belief, culture and practice that had been followed for centuries.

“Some individuals and organizations are creating a false story about the festival. They propagate a false agenda about the Hussain Sagar polluted only by idol immersion. The lake is being polluted by industrial wastewater,” Rao said, adding that there were no concrete reports showing pollution in lakes by testing water quality before and after submersion.