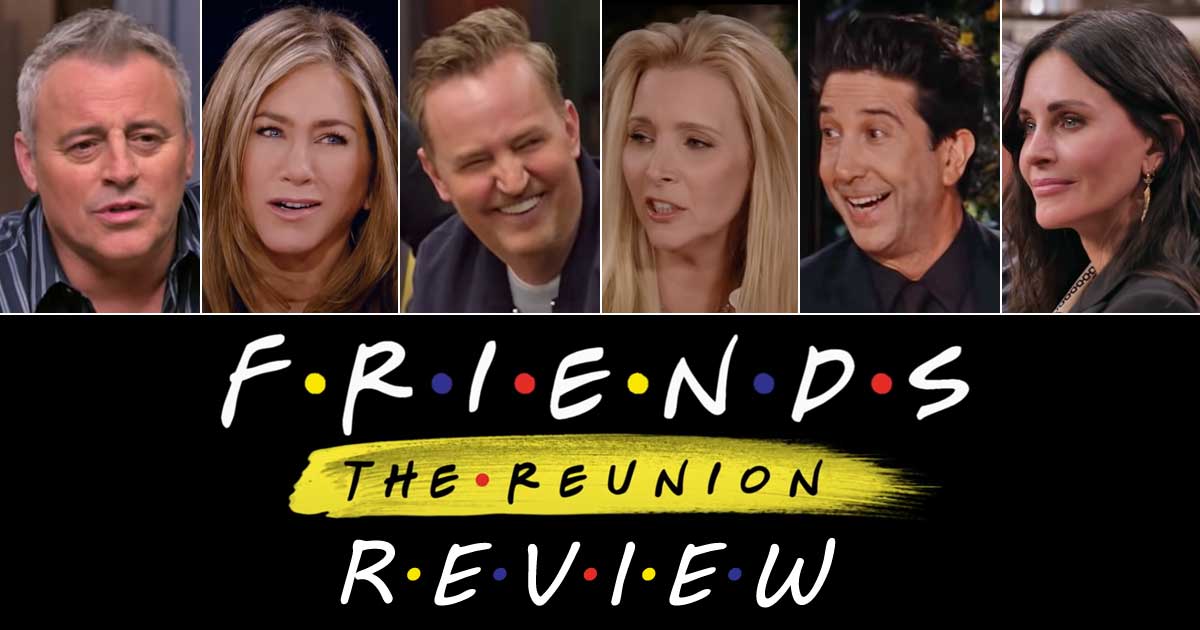 Star Rating: Can there be another number?

Friends: The Reunion Review: What’s It About?

It is a reunion of six of our friends who, seventeen years ago, decided to leave us after being with us for ten years. This is something you only look at if you’ve been with these friends for a greater part of your life now. It’s definitely not for those who hate the show just because it’s cool to do so. This is for us, the fools, who came home only to see these six people regularly grow up in your living room (or wherever all your furniture is facing).

The show begins with Ross Geller (David Schwimmer) entering the set that left the team in 2004. The other friends follow, and Matthew Perry’s Chandler enters the last one as he is welcomed with “Could you be any more late?” In a parallel track, we have James Corden conducting his ‘late night show’ with them all on the front porch amid the presence of the iconic bench and fountain.

In the last scene, Chandler sarcastically asks “where?” (which wasn’t even in the script) for Jennifer Aniston’s “let’s have some coffee” comment & here they are back, reliving some of the many memorable moments. There are many things you love about the show and a few that you might have liked, but they’re only together for 100 minutes.

Once they all come together, you realize how they don’t even need a script to create that nostalgic feeling around them. You just need a guitar riff and six of them together in a room talking about whatever they want. Even that would have been enough, but this one contains much more than that. Now, is that a yay or meh? It will fit most parts, but you can’t justify all the cameos. Justin Bieber as Spud-nik & Lady Gaga’s Smelly Cat is the best of them all.

The song of Marta Kauffman and David Crane talking about casting the six friends reveals a lot of unheard of facts. David Schwimmer was given gift baskets to convince him to come on board for the show. Matthew Perry had $11 in his pocket when he auditioned for the show, and now he earns about $20 million every year just because of one show. Jennifer Aniston was told “Friends won’t make you star”, and Rachel was the hardest casting decision for the creators. A hundred minutes are filled with such mind-blowing trivia.

With some questions from the audience & Corden’s more or less tedious attempt at hosting, the “chat show” track is saved by the cast’s great anecdotes.

One of the funniest impromptu highlights is Joey knocking on the door before entering; Monica asks, “Have you ever knocked before?” To which he replies, “Just at the reunion.” Each actor turns into their respective characters, even if they try not to. Matt LeBlanc is all Joey when he giggles at the “playing with the bones” giving it a double meaning making it hilarious, something he did for ten years.

LeBlanc is going to “speak for yourself” as they talk about how they haven’t “grown” in all these years. This is exactly what Joey would do. The show has now been viewed more than 100 billion times since the first episode aired. The fans section is where all hell breaks loose and a fan adding “they were my friends, they were the people I came home to” reinforces the belief that this isn’t your average TV show (as quoted by Marta Kauffman in the reunion).

Matthew Perry revealed how he thought he would die if the live audience didn’t react well to his rules and hinted that it wasn’t all fun and games. The cynic in me immediately wished how the team could have talked more about the bleak side of being part of such a cult show. It didn’t, because obviously the current situation calls for lighthearted things, but Courteney ends up breaking your heart when she says, ‘This would be the last time we talk about the show as a group. We’re not going to do that in fifteen years.” That’s the truth bomb we weren’t ready for, and that’s how it ends. Like life, it’s not quite fair, but it is what it is.

All said and done, just get off the plane (from sadness and heartbreak), knock on that striking purple door again to find out they’ll all be there for us no matter what. It’s all our lobsters!

Which season of ‘American Horror Story’ is the best? – FilmyOne.com