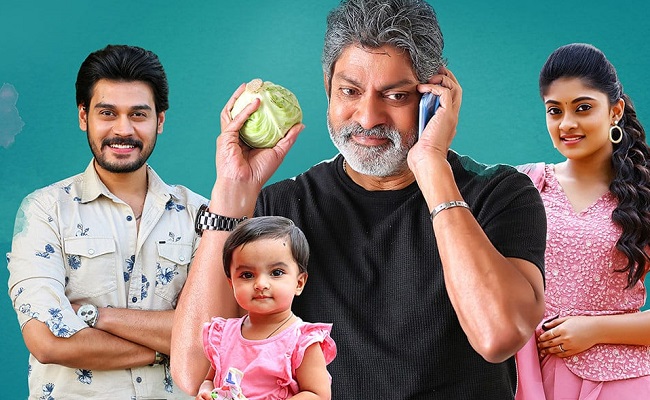 The title “FCUK” aroused curiosity. Because of such a title, we do not associate either with Jagapathi Babu, nor with the production house that produced neat family entertainers such as “Ala Modalaindi”.

The contemporary title and the different styles of promotions have created a good buzz around this low budget movie.

Did the movie work? Let’s find out.

Maphik (Raam Karthik) is the son of a businessman Fhani Bhupal (Jagapathi Babu). The wife of 60-year-old Fhani passed away many years ago and he becomes Casanova. He owns a condom marketing company.

Maphik loves a family doctor named Umaa (Ammu Abhirami), who is already engaged. Still, Umaa agrees to go on a date with Kaarthik for three days, because she lost a challenge.

This leads to some long and crazy romantic episodes. While he has problems with Umaa, his life takes a different turn when his father brings Chitti, a toddler. Fhani Bhupal says that Chitti is his daughter with one of his lovers.

Why on earth did the 50-plus Jagapathi Babu who has managed to establish his career as a villain and character artist agree with this silly character? It’s uncomfortable to see him bragging about his ‘Casanova’ image at this age. With visible wrinkles on the neck and aging skin, he does all kinds of awkward actions.

Raam Kaarthik looks good, but has insufficient acting skills. Ammu Abhirami’s character is crazy. Ali’s comic sequences are a clear example of how dated the scenes are.

The movie doesn’t even offer a decent output from a technician. Mediocre work by all technicians.

A movie can be good, bad or average. “FCUK”, which stands for “Father Chitti Umaa Kaarthik”, is beyond all that. It’s outrageously stupid, an example of stupidity. There are plenty of scenes in the movie that show the director and writers’ folly. The film smacks of low-level thinking and idiocy.

Wonder how Damodara Prasad, who produced such new-age films as “Ala Modalaindi”, gave the green light to this mindless work?

Where to start and where to end? This is such a clueless film.

Umaa, played by Ammu Abhirami, is a doctor by profession. But she does everything but treat the patients. She and her colleague are concerned that men are not looking at them. Umaa also says that her first date went wrong because she farted in the car.

In one of Allari Ravi Babu’s craziest movies, there was a scene about a baby’s diaper landing on a hero’s face. The same scene is repeated here.

The romantic song between Karthik and Umaa will test your patience. The director further tests our patience and comes up with outdated comedy tracks with Ali and Master Bharath.

We can go on and on about the plethora of dumbest scenes this movie has, but let’s stop ranting here. In short, ‘FCUK’ is without a doubt one of the worst movies we’ve seen in recent times. With the intermission, you cannot sit on the seats and try to escape from the theater.

Bottom-line: What the FCUK!