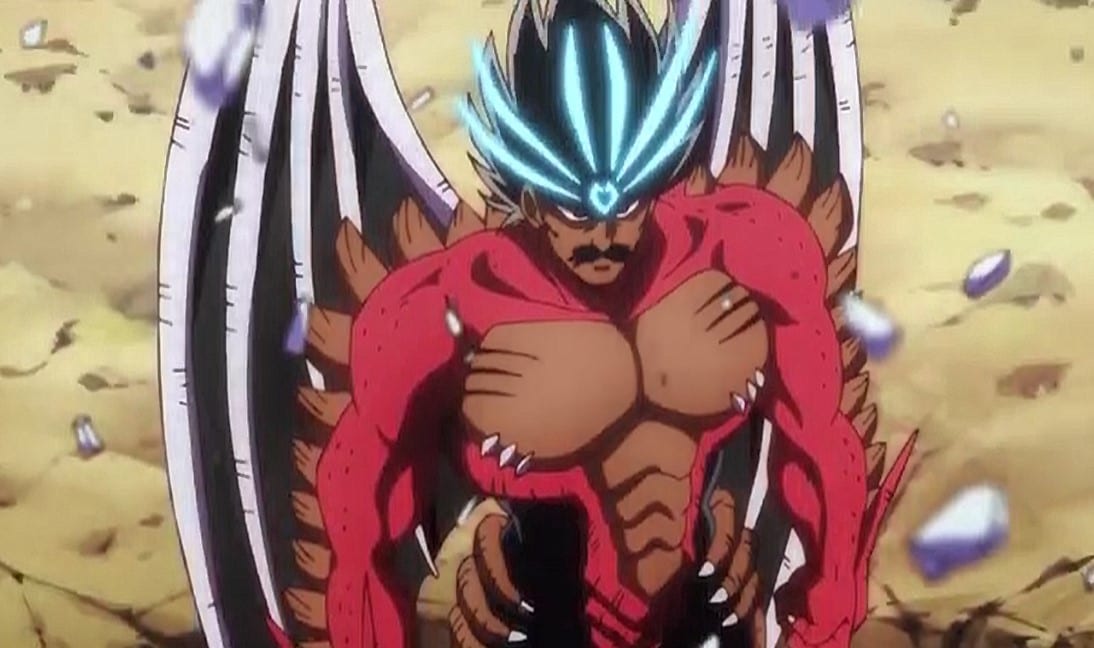 After Hyunckle was knocked down by Land Ride, Sea Rider woke up and squeezed Popp’s head. Sea Rider told Popp to drop his weapon or his skull will be crushed. Hyunckle gets up and tries to defend Popps. Hyunckle asks if he will drop his weapon to spare Popp’s life. Sea Rider notes that he is not interested in killing the weaklings. He wants Hyunckle’s head, and Popp told Hyunkle not to obey Sea Rider’s orders. He realizes that Sea Rider may not keep his words and ends up crushing his skull.

Popp told Hyunckle to kill Sea Rider, and he’s willing to sacrifice his life. He reminds Hyunckle that he no longer has any magical power and only Hyunckle can help Dai. Hyunckle drops his weapon so that no one will die. He notes that he has joined Dai’s crew to bring bad luck to wrongdoers. Hyunckle said he would rather not give Avan another reason to berate him in the afterlife. But he cannot abandon a younger disciple, as Avan will reject him.

Previously in Dragon Quest: The Adventure of Dai, Episode 29

Sea Rider releases his weapon and notes that Hyunckle has done a great job. When he’s about to kill him, a spear goes through his mouth. Sea Rider falls on his back and Hyunckle wonders who attacked him. Hyunckle looks back and discovers that it is Land Rider Larhart who pierces Seas Rider with his spear. Sea Rider died instantly and the two wonder why he saved them. Hyunckle questions Larhart, who is lying on his back. Larhart reveals that Dragon Masters is following their rules.

They don’t use a hostage to get what they want, and using a hostage would put the Dragon Masters to shame. It would be unforgivable since Sea Rider used humans as hostages. The Dragon Masters views humans as weaklings and they don’t need to hold humans hostage. They fight fair and square, which is why Larhart killed Seas Rider, who wanted to ruin their reputation. Hyunckle asks why Dragon Masters hates so many people.

Larhart reveals that like Master Dino (Dai), he is born between two different races. He also reveals that he was born between a Darkling and a Human. His dark father died earlier, and his human mother raised him. When he was seven, a war started between Dark Lord Hardlar and the people. During the war, the people discriminated against Larhart because of his Darkling ancestry. They also hated his mother, who gave birth to a Darkling, and the knights beat his mother before his eyes.

Dragon Quest The Adventure of Dai

Lahart’s mother grew weak and fell ill. She died an abandoned death, and Larhar met Baran in his lonely time. Baran took him and raised him as his child. Baran always misses his missing son Dino, and he didn’t know Dino was the hero Dai. He fought heroes with the help of Darklings until one day he clashes with Dai and finds the truth. During his fight with Dai, he discovers that Dai is his prodigal son Dino. He decided to leave the battlefield and said he would come back to reclaim Dino.

Crocodine realizes that Dai is Dino, who has been missing for years. Baran decided to form his part to reclaim Dino, as he had promised to Dino’s mother, who has passed away. But the heroes don’t want Dai to live with Baran, since he was once part of the Dark Army. Dai has lost his memories and he knows nothing about what is happening. But Leona manages to get Dai back some of the memories they spent together. Larhart reveals that Master Baran is the one who understood his pain, as he has walked the same path as he has.

Popp got carried away with Larhart’s speech and wept. He realizes this bastard laying on the floor isn’t that bad. But his problem is, what will they do to Dai if they manage to reclaim him. Larhart told them to understand Baran’s pain and take care of Baran and Dai. He offers his Dark Armor Spear to Hyunckle. Baran arrives at the kingdom and asks Leona to hand over Dino. Leona refuses, and Hyunckle arrives with a Dark Armor Spear. Baran transformed and became a real Dragon Knight.