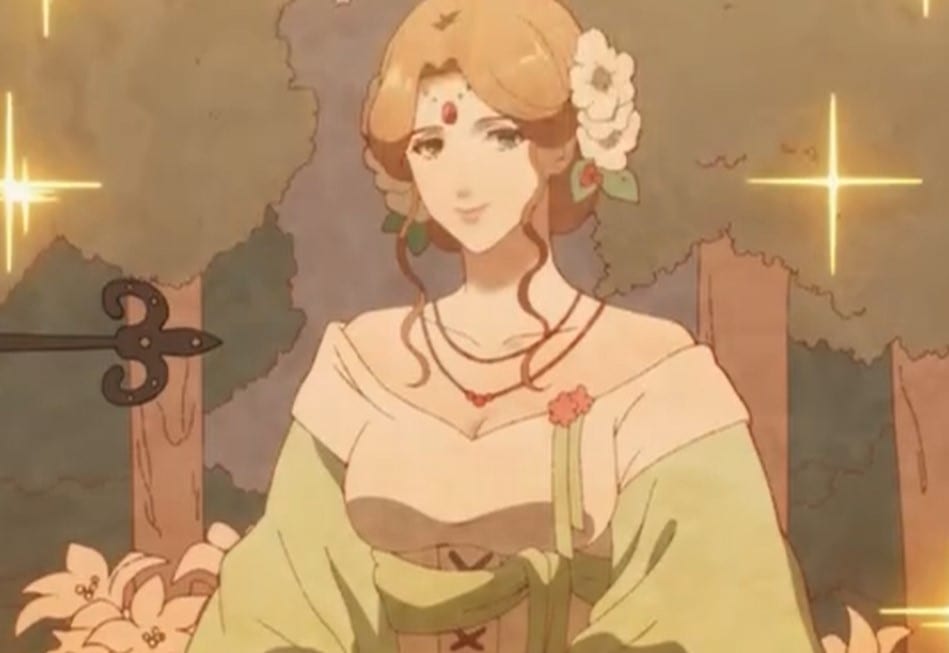 He reveals that Adventure Stable is a bag that can hold any item, regardless of size. Later they arrive at the cave and Letty heard the sound of water. He wonders if they run their showroom from this cave. Dearia agrees, revealing that the ladies have only been doing business here for a thousand years. They were welcomed by three wizards each with a long nose and an eye patch. Letty jumped away, thinking the trio has begun to cast a spell on them.

Dearia revealed that these are the women he was referring to. Dearia reveals they are Graiae Sisters, skilled craftsmen and frequent buyers. They ask the red sweet boy his name and he replies that he is Letty. They told Letty that they usually reject newcomers like Letty. But they would make an exception for their sweet read boy. They told Letty to learn everything in the cave. One of the sisters opens a curtain and Letty saw a beautiful dining room.

He cannot believe there is a room in the cave like a five-star hotel. They told Letty that in this cave they have everything Letty could ever need. Letty finds that everything suits him as he is a giant dragon. Dearia opens the door and notices that they also have a door the size of a dragon. But Letty notices that the doorknob is missing and asks Dearia. Dearia reveals that the buds are sold individually for a reason.

He shows Letty three different doorknobs and reveals that he can travel to different locations by inserting one. Letty tried the fist and opened the door. He was shocked to see that it is the world of old bearded boys on the other side. He realizes that he won’t fit there when he uses that button, as he is still young. Letty overheard the old folks talking about taking care of dragons in their past lives. They also want to send a team to re-capture that dragon.

Letty closes the door before they saw him and realizes he will never use that button again. The sisters told Letty not to worry as they would show him something that would surprise him. They opened a door and revealed that it is Gallant Lady’s Gate. Letty saw a beautiful lady who waves and winks at him. Letty notes that a painting is alive. Dearia told Letty that he could tell the Galante Lady the magic word, and the door will open for him.

But there is a time limit for doing that, and if he fails, she will read one of Letty’s embarrassing poems aloud. Letty Said What and the Gallant Lady “My Flame of Love” by Letty. “ Our meeting was a fateful spark of fate, now my flame of love burns hotter for you every day. Although it burns and burns my hollow body, my happiness is endless because this burning pain is proof of my burning love for you. The sisters were charmed by the words of the Brave Lady.

Letty was crying and they told him not to be a baby. Letty saw the light and notes that it is a single beam of light shining from heaven to embalm his wounded soul. Dearia told Letty not to touch the light or it will be destroyed. Realizing that the poem touched his heart, Letty mistook the house light for the light of heaven. Letty later decided to leave because everyone regards him as the legendary flaming dragon. But they are not aware that he is weak, and he does not want them to find out. Dearia convinces Letty to stay and accept the way he is.