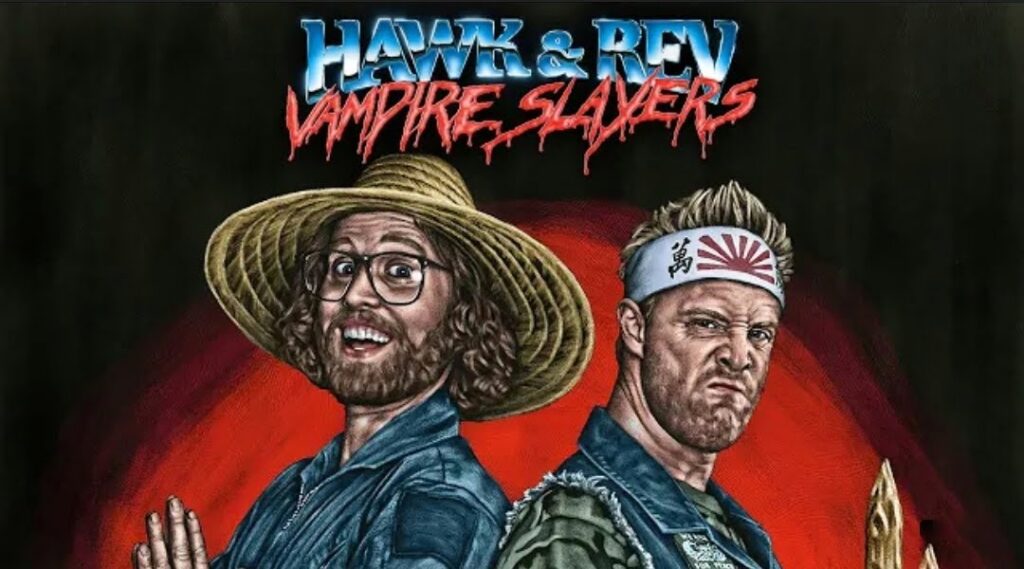 Director’s Statement by Ryan Barton-Grimley, AKA – RBG, director of Hawk and Rev: Vampire Slayers. “So why the hell did I make HAWK AND REV: VAMPIRE SLAYERS? Honestly… The world is just so serious and it’s exhausting to use media and technology 24 hours a day. It’s really intense how many problems there are all over the world. There are so many problems everywhere and please don’t hate me for saying this, but – I was looking for a way out. I was looking for a laugh and something sincere, some much needed levity and humor. I was looking for a break, so I selfishly made HAWK AND REV: VAMPIRE SLAYERS.

“Philip “HAWK” Hawkins doesn’t just dream about killing vampires – he eats, sleeps, drinks and inhales it. After being thrown out of the army for putting down a fellow soldier with a two-by-four blunt, Hawk nearly dies of boredom while working as a night guard in his hometown of Santa Muerte, California – USA. Just when it seems like all of Hawk’s options in life have expired, filthy bloodsucking vampires appear and of course – No one believes him. With his back, against the wall, his sweaty Karate Kid headband on and hordes of murderous vampires approaching, Hawk enlists the help of the only person who kind of believes him – Revson “REV” McCabe, a dumb, vegan pacifist gardener. Together they join forces to save the whole crazy world. Well, at least their birthplace. (feature – horror/comedy)” – news from an anonymous source.