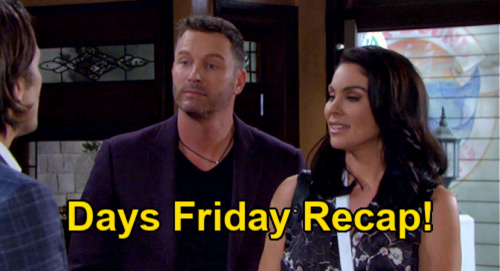 Days of Our Lives (DOOL) spoilers recap for Friday, July 16, reveals that Xander Cook Kiriakis (Paul Telfer) was out on bail and Nicole Brady’s (Arianne Zucker) public deception began. Sami Brady DiMera (Alison Sweeney) sat front row for the destruction she wrought, so here’s how it all went in Friday’s DOOL episode.

EJ hadn’t expected such a warm welcome home, but Belle was happy to know that EJ and Sami were doing well since they’d been through so much together.

EJ insisted that Sami was truly an angel and praised her for standing by him despite his harsh treatment of her previously. EJ was also happy that Belle had agreed to do some legal work for DiMera.

Belle discussed EJ’s sibling rivalry with Chad DiMera (Billy Flynn) and understood because she had one of her own with Sami.

EJ was confused when Belle brought up the party, so she explained that Eric Brady (Greg Vaughan) was at home having a birthday party with Nicole.

Belle was perplexed because Sami hadn’t filled out EJ yet, but he assumed Sami had just gotten caught up in something.

At the Salem PD in the Friday’s Days episode, Sami stormed into the interrogation room and raved about Xander’s arrest.

Xander admitted to assaulting a police officer, but pointed out that he could still make the confession tape that Sami wanted.

Sami said that wasn’t good enough and revealed that plans had changed. She insisted that Xander blow Eric and Nicole’s marriage out of the water instead.

Xander reminded Sami that he was handcuffed at the desk, so she found a lawyer at the courthouse and came back to explain that he had paid bail.

Sami took it from the promised money, but assured Xander that he would get it back as long as he did what he had to do. She wanted Xander to be half an hour late and shatter Nicole’s marriage.

Sami wanted everyone to know that while Eric helped people all over the world, Nicole slept there with Xander.

“Happy birthday,” Sami said with a grin. She was concerned when Xander suddenly became insecure about doing this.

Xander knew that everyone would despise him more than they already do – and besides, he would be fired from Basic Black.

Sami claimed she would make sure the truth would come out anyway, meaning Xander would be fired anyway. She felt Xander might as well take the money.

Sami eventually got a call from EJ, who asked if she wanted to tell him “what the hell was going on”. She soon realized this was about the party and pretended to be home looking for something to wear in her closet.

After Sami promised to meet EJ at the party, she turned her attention back to Xander. Sami swore he would give Xander half the money now and half when he was done.

Xander threatened to call the whole thing off unless he got it all now, so Sami gave in, trusting that he would do as he was told.

At home on the Friday’s Days episode, Eric admitted to Nicole that he had to go back to Africa to complete his three-month extension.

However, Eric insisted it was only for a few weeks and then he would be back for good.

Eric wanted to focus on being a good husband and father, but Nicole confessed that sometimes she felt she didn’t deserve Eric.

Eric claimed that Nicole was perfect for him. He felt they had been waiting their whole lives for this marriage and family, so he was eager to return to Salem for good.

Eric thought they always belonged together. After Eric and Nicole got dressed, he twirled her around the living room and took her to the pub.

In Marlena Evans (Deidre Hall)’s office, she was stunned when John Black (Drake Hogestyn) revealed that Eric was back in town planning an anniversary party.

Marlena couldn’t wait to see her son again and was looking forward to attending the event with John.

At the Brady Pub, Philip suggested that Lucas Horton (Bryan Dattilo) could get Kristen DiMera (Stacy Haiduk) to deliver the letter to EJ.

Lucas didn’t even know where Kristen was and rejected Philip’s next suggestion to just put it in the letterbox.

Lucas had to make sure someone put the letter directly into EJ’s hands—someone who wouldn’t mind sticking it to that jerk.

Roman Brady (Josh Taylor) heard and wondered which bastard they were talking about, so Philip lied that they should teach Jake DiMera (Brandon Barash) a lesson for what he did to Kate Roberts DiMera (Lauren Koslow).

After EJ arrived, he briefly clashed with Philip before pulling Lucas aside. EJ noted that Allie Horton (Lindsay Arnold) was now doing well, so Lucas didn’t have to call or come by.

In fact, EJ thought Lucas shouldn’t have anything to do with Sami at all.

EJ thought this was about respect, but Lucas fired back at EJ treating Sami like garbage for years. Lucas felt that EJ had no right to lecture him about respect.

EJ objected that Sami lived a very full life with him, so Lucas had to take on a life of his own. He remembered that Lucas wanted to give him a smoking gun before, so he thought Lucas could give him that now.

The arrival of Sami, however, prevented Lucas from answering. After Lucas walked away in horror, EJ told Sami that her ex wanted to give him something sooner. EJ guessed it wasn’t that important.

On Basic Black, Chloe Lane (Nadia Bjorlin) reminded Brady Black (Eric Martsolf) that she was with Philip and couldn’t go to the party as his date.

Brady insisted that he go as Eric’s brother and Chloe as Nicole’s boyfriend. He saw no reason why they couldn’t walk through the same door together, so Chloe was fine with that.

Though Philip wanted to stay for the bash, Brady pointed out that it wasn’t a big blowout where a loser could get in from the street. This was an event for family and close friends.

Philip insisted he was related since Nicole was his stepmother. He assured Brady that he wouldn’t feel comfortable despite not knowing the happy couple very well – not with Chloe there by Philip’s side.

Brady and Philip continued to argue for the rest of the party, but Chloe mostly focused on expressing her happiness for Nicole.

There was tension between Nicole and Sami as the latter approached with EJ by her side, but Nicole was determined not to let anything put her off.

Eric was happy to see EJ recovered with Sami’s help. Eric added that Sami always found a way to get what she wanted and winked at his sister.

Sami kept checking her watch and looking at the door, so EJ asked if she was expecting anyone.

After Sami denied it and a toast came out, Nicole and Eric said a few heartfelt words to their guests.

Eric took responsibility for the difficult divorce they had to endure because of his time in the Congo, but he knew he never wanted to live without Nicole.

Eric asked his guests to toast to the most loving, beautiful and understanding woman in the world.

Suddenly Xander came in as a party animal.

Xander wondered if Eric would feel the same way if he knew Nicole was snooping behind his back while sweating in Africa! Sami pretended to be shocked before grinning into her champagne glass.

Days of Our Lives spoilers say Xander will be done dropping the bomb when the week of July 19-23 kicks off, so keep watching NBC’s DOOL!

CDL will have plenty of other great Days of Our Lives spoilers, updates and news, so make us your hot spot of choice.

Ben is determined to end Ciara and Theo’s marriage, while Xander reveals information that could tear Eric and Nicole’s marriage apart. Watch #DAYS weekdays on @NBC and stream exclusively on @PeacockTV free. pic.twitter.com/dcdTBUDONr

Lisey’s story season 2: Will it be extended, canceled on Apple TV+?

Dynasty Season 4 Episode 11: Release Date and Promo of “A Public Forum For Her Lies”