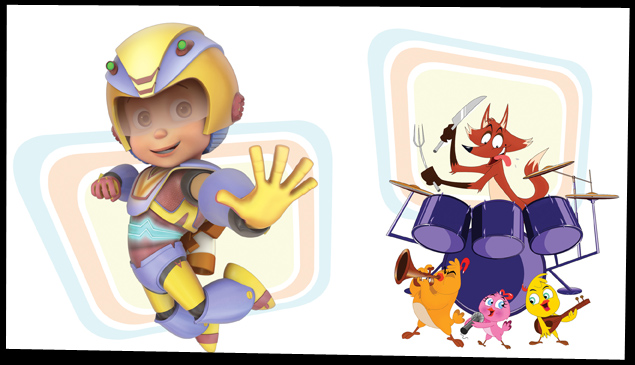 In North America and LATAM, American streamer Olympusat Entertainment has picked up Pay TV and digital rights for 221 half-hours of catalog titles, including Vir: The Robot Boy, Eena Meena Deeka and Chacha Bhatija, along with the new show Harry.

In India, Disney + Hotstar has acquired online rights for 130 half hours of the same popular library shows.

Spectrum Film, the Indonesian broadcasting and content distribution company, has licensed 536 half hours of 10 original shows from Cosmos-Mayas; while Dubai-based Dubuzz Entertainment has acquired non-exclusive AVOD rights for 208 half-hours of rating-winning Motu Patlu and Chacha Bhatija.

In North America and LATAM, US-based streamer Olympusat Entertainment has picked up Pay TV and digital rights for 221 half an hour of catalog titles, including Vir: The Robot Boy Eena Meena Deeka and Chacha Bhatija along with new show Harry

In India, Disney + Hotstar has acquired online rights for 130 half hours of the same popular library shows.

Catrack Entertainment’s upcoming English and Punjabi-language platform Heeroz OTT has acquired worldwide non-exclusive rights for Vir: The Robot Boy and Chacha BhatijaAlso in India IN10 Media is launching a new channel with the title Gubbare with 78 half hours of Cosmos-Maya’s internationally co-produced shows such as Atchoo, B.erry Bees and OPS

Nihal Kotian, Senior Manager of International Content Distribution & Acquisition at Cosmos-Maya noticed 2020 has been an extraordinarily productive year for Cosmos-Maya from a syndication and licensing standpoint thanks to our deals secured by WOWKIDZ. We have witnessed a phenomenal increase in the areas our content reaches and the massive license volume of nearly 1,200 half hours in our original IP library, with new and returning digital OTT and pay TV partners around the world. The work we’ve done in content syndication improves our business reach and brand presence globally, and we’re delighted to have a growing collection of international partners. “

About Cosmos-Maya
Founded by internationally acclaimed Indian filmmakers Ketan Mehta and Deepa Sahi, Cosmos-Maya is a Singapore and India based animation company that produces high quality 2D and 3D animated content. KKR backed Emerald Media, a pan-Asian platform founded by the leading global media and entertainment investment company, and acquired a majority stake in Cosmos-Maya in 2018.

The company mainly focuses on creating IP in children’s animation space and is currently working on multiple Indian animation TV series with all major linear and non-linear broadcasters in the area. As a leading producer with a track record of successful shows, the studio currently has 18 broadcasts and 10 in production, including four completed European co-productions, and the fifth and final is ‘Galactic Agency’, a co-production with Studio 100. The studio is also making its appearance. done in the domain of the International Animation Feature Film and co-produces the full-length film ‘Dogtanian and the Three Muskehounds’.

Cosmos-Maya has a solid reputation for the consistent delivery of popular Indian animated content and has produced an unprecedented 40,000 minutes of original animation over the past five years, comprising over 2,000 half-hour episodes. Cosmos-Maya IP addresses are currently broadcast in more than 150 countries.

Cosmos-Maya’s collection of YouTube channels under the umbrella brand WowKidz is one of the fastest growing children’s platforms in Asia. These channels have a cumulative subscriber base of more than 40 million and total views of more than 20 billion in March 2020. In addition to its domestic catalog, it also airs hugely popular shows such as The Smurfs and the Chinese franchise Boonie Bears and Little Baby Bum for preschoolers.

Will the GOP impeach Kamala Harris or Joe Biden? See their statement – Filmy One