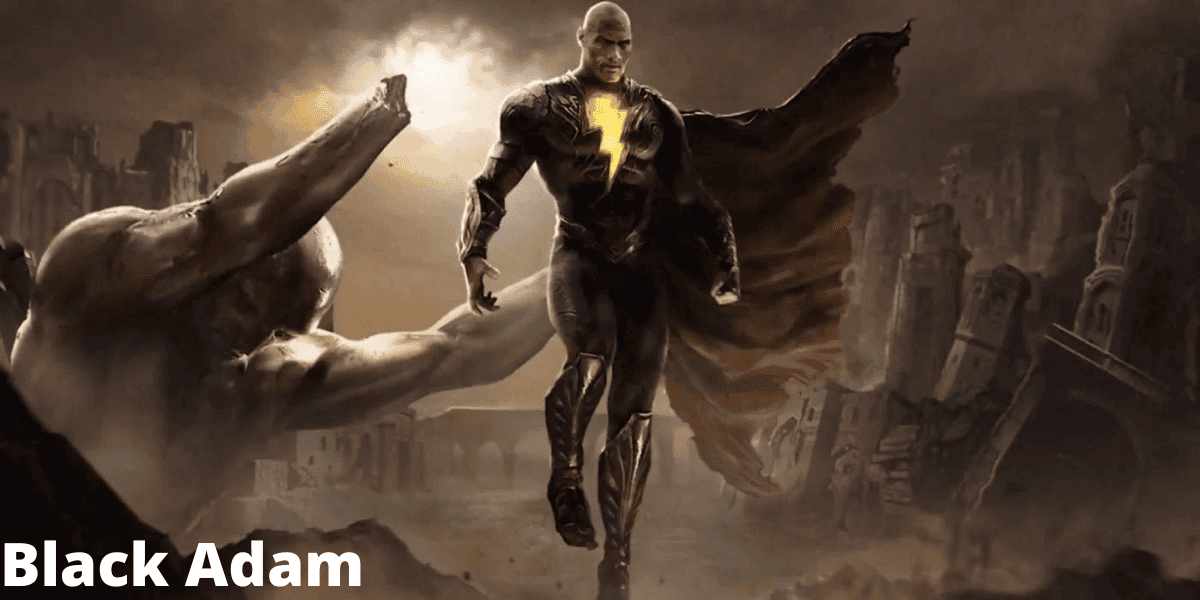 When it comes to big endeavors from The Rock, there’s still a lot of excitement, but this one is especially thrilling as it’s his first foray into the superhero movie realm with the movie Black Adam.

Dwayne Johnson revealed in January 2020 that he had actually started working on Black Adam. The idea of ​​making films around the iconic DC Comics superhero has indeed been discussed at length, but this is only now that the wheels are in motion.

Black Adam material doesn’t really exist that could be turned into a teaser, given that the movie is still in the early stages of development, we have, at best, a clear and clear understanding of what to expect from the movie.

With all that insight, we’ve put together this helpful article to keep track of everything we’ve learned about the new movie so far.

On June 17, when DC announced its first-ever DC fandom on August 22, 2020. The fans were enthusiastic about this event. It was a 24-hour convention, and it’s virtual because of the pandemic. It’s the very first of its kind and DC used this platform to reveal some details about highly anticipated projects like Justice League Snyder cut released in 2021 on HBO Max, CW and DC universe projects still in the pipeline. The fans’ adrenaline rush soared when James Gunn, the director of the Suicide Squad sequel, showed up there with the entire team of his upcoming Suicide Squad sequel.

But the talk of the show was the very first adaptation of DC Comics’ famous anti-hero ‘Black Adam’ to be played by Dwayne Johnson AKA ‘The Rock’. So let’s dig into more details about the movie and how it will be played.

If you’re a fan of DC comics and a die-hard lover of his movies, check out the latest announcements about Robert Pattinson Batman.

The ‘Rock’ aka Dwayne Johnson likes to surprise his fans. It could be in terms of extraordinary action scenes or its great lifestyle. And to add to his list of surprises, he took over Instagram on June 17, 2020 and announced

The power hierarchy in the DC universe is about to change.
I’ll join the epic and be the first of its kind, #DCFanDome on 22.08.2020
This one is for YOU – THE FANS. #BlackAdam⚡️ pic.twitter.com/eolQUYhsAn

It was an overwhelming moment for most of us.

Black Adam’s expectation was from 2008. But only after the release of Shazam, we were sure that Shazam’s nemesis, AKA Black Adam, is not far behind. The Black Adam will be released in 2022. And it will be another year before we can see our favorite Dwayne Johnson as Black Adam on the big screen.

Dwayne Johnson AKA ‘The Rock’ told his fans he’s wanted this role since 2008 and wasn’t able to get it until 2014. It shows Dwayne Johnson’s keen interest in this character. We hope his performance is consistent with his excellent dedication. And for us fans, just one more good news in these terrible times of pandemic.

The movie is still in the pre-production phase, but DC has announced a new animated teaser at the DC fandom event. There isn’t much official footage, but we can get news from the cast and crew. And it’s not a bad idea to hope for more great surprises from DC.

The film debuted on a unique Dwayne Johnson-hosted Black Adam panel in DC Fandom in August 2020, showing what’s to come.

If you’re someone who can’t imagine a world without Mario, check out Nintendo’s latest announcement on Mario Kart 9.

A lot of details about Black Adam, like all major comic book movies, are indeed kept hidden for the foreseeable future, but we’ve heard a lot about the venture in recent months.

The main body of the movie, like any other standalone comic book movie, would be the one mentioned in the name, but it’s far from the only one in the story.

Dwayne Johnson is central to Black Adam, but in the story he takes on the first adult version of the vigilante known as the ‘Justice Society’.

While you may not recognize the name, there is a good possibility that you are familiar with the Spanish director Jaume Collet-Serra.

Collet-Serra has a diverse filmography that includes the revival of House of Wax, the horror film Orphan and The Shallows.

Dwayne Johnson and Emily Blunt star with his most recent movie, the Disney ‘Jungle Cruise,’ and the pair clearly got along well on set as they join the DC Extended Empire smash.

The director clearly has to bypass the oversized responsibility of bringing the DC universe’s famous character to the big screen, as Black Adam is the Shazam’s nemesis and Warner bros are clearly planning a showdown between them in the near future. , so to keep the expectation high until that brawl, Black Adam’s first appearance must be huge.

If you are someone who thinks of dark universes where good hides behind the shadows of evil, check out the new announcement on Bloodborne 2.

Here is the list of great and outstanding cast members who will be appearing in the movie Black Adam.

Black Adam was invented by Otto Binder and CC Beck is one of the many well-known supervillains in the DC universe. He is primarily Shazam’s adversary and arch-rival.

The film starts generations earlier, with the protagonist serving as a servant in a historic land called Kahndaq, to ​​explore the roots of the subject.

The magician Shazam bestows enormous power on Adam, believing he has the potential to be a great warrior for good, but Adam ends up using it with extreme ferocity.

He is vanquished and imprisoned after centuries of chaos, but he emerges after 5 thousand years to cause chaos in the world today.

So if you think Pikmin 3 deluxe was the ending, then you are wrong, because Nintendo surprised us all, check out the latest announcement about Pikmin 4 here.

Aside from The Rock, Noah Centineo was also the only star on the Black Adam team for some time, with the studio getting people involved a little earlier that the brilliant actor from ‘The Perfect Date’ enters a DC Comics movie to play a totally amazing role.

Atom Smasher, whose real name is Adam Rothstein, is a metahuman with the power to grow to 60 feet tall due to his family heritage – his ancestor was a nuclear scientist turned reluctant supervillain.

He gets smarter and more dominant as he grows up.

Aside from assuming that he will be part of the Justice Society and also fight tooth and nail to kill the title character’s main character, we don’t understand anything at all about how Atom Smasher will be represented in Black Adam, so we’d like to learn some.

Considering that Black Adam will be using the already famous interpretation of the story. The film introduces viewers to Carter Hall, an archaeologist who discovers he is the result of a larger series of reincarnations that began with an Egyptian dispute here between a royal and a priest.

He wears a suit made of a substance known as N-de metal that he can consciously manipulate so that he can enhance both the power to fly and his senses.

While his outfit is one of the weirder models in DC Comics, translating the role for the feature film can be difficult, but Black Adam’s upside is that the movie cast a super gifted performer to portray the character.

The cyclone played by Quintessa Swindell

Cyclone aka Black Adam is one of the representatives of the Justice Society who will be featured in Black Adam.

Maxine Hunkel is really the only one who has never seen a real-time adaptation before, which makes it even more interesting to see who gets the part and makes their mark.

Cyclone, like Atom Smasher, is a heritage icon in that she is the descendant of the classic Red Tornado, Abigail “Ma” Hunkel, and reaches her superhuman abilities when TO Morrow, the evil creator of the robot Red Tornado, penetrates hair with nanomaterials.

She has the power to control aether waves that she uses to float and fight.

‘Doctor Fate’s origins in comic books can be traced back to a man named Kent Nelson, who finds the grave of a wizard named Nabu the Wise’ and learns the magical arts as a way to combat wickedness.

After Kent Nelson’s debut in 1940, there were several unique iterations of the role, but what unites them all is an array of exceptional talents that can be featured in Black Adam.

The film would be the hero’s first live appearance since he was recently worked by Brent Strait.

Black Adam was initially scheduled for a 2021 launch, but the decision was made once Warner Bros realized the magnitude of the effect of the COVID-19 pandemic on the film production process.

The company had to exclude the film from their lineup of upcoming DC movies for a while after filming moved from Fall 2020 to Spring 2021. However, a major update order was placed in March 2021, and audiences can now look forward to the Black Adam movie on July 29, 2022.

If you have animated movies and your heart is pounding for long-loved franchises, check out the new announcement on Cars 4 here.

A lot is happening here right now, but possibly all expectations would pay off with all the fantastic when the movie hits.

Are you excited to see Dwayne Johnson as Black Adam in the DC Comics hero’s first major movie and take on the Justice Society?

Then let us learn what you’re hoping to see in the next DC interpretation of Warner Bros. in the comments, and check back to this site regularly for updates as more details about the movie become available.

Final Preview of the ‘Black Lightning’ series: Previews from the maker is nice adieu