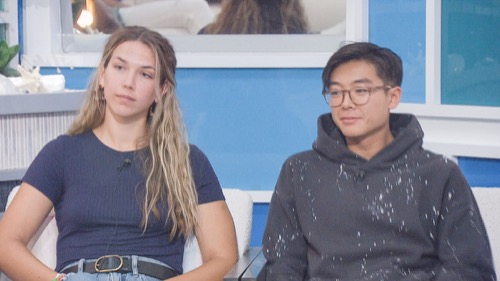 With The Cookout relentlessly dominating this Big Brother season, it’s true that this summer’s strategy has become a bit of a snooze. But… as self-admittedly Derek X. Stan, I’m not upset about the way this week unfolded for Sarah Beth, as predictable as it was.

Head of household Tiffany, then? Anonymously Head of household Claire, both nominees Sarah Beth and Kyland, who remained on the block after Power of Veto winner Hannah rescued third nominee Xavier. We all know how it goes from here: The Cookout easily has the numbers to keep Kyland and boot Sarah Beth, an oblivious Sarah Beth spends all week campaigning anyway, yadda yadda yadda. Read on for more details from Thursday’s episode:

THE STRATEGY | Sarah Beth’s eviction seems so inevitable this week, Big Brother doesn’t even show much of her efforts to get votes. Instead, the pre-recorded strategy segments are dedicated to the Cookout members, who are already thinking about which of their allies should be ousted first once they reach Final Six. Bottom line: Derek F. is a strong Final Two candidate in just about any configuration of the six, as almost anyone would beat him in the end – but Tiffany hopes to make it to the end especially with Hannah.

THE JURY | We also make our first trip to the jury house, where Britini is utterly stunned to see Derek X. walk through the door. He shows her the heartbreaking events of the past week – from from July narrowly losing the HOH win, with Xavier saving himself with the power of veto—and when Derek shares the contents of Kyland’s farewell message to him, in which Kyland reveals that he works with a separate group of people, Derek and Britini quickly share what’s really happened in the house all summer.

Not only does Derek X. correctly name all six Cookout members, but a lightbulb goes off when Britini casually mentions that Xavier and Tiffany both had solid partners in Alyssa and Claire. Derek X. immediately sees Tiffany’s master plan, giving all Cookout members a non-Cookout partner to protect themselves with. If only he had realized this so soon inside the House! Great.

THE eviction | shocking no one, Sarah Beth is evicted by a 5-1 vote, with Tiffany giving her a compassionate voice. And while they don’t mention The Cookout outright, both Kyland and Azah reveal in their parting messages that they work clandestinely with others in the house, which seems to comfort Sarah Beth in the wake of her eviction.

THE HEAD OF HOUSEHOLD COMPETITION | The latest HOH competition – which Claire can only enter for the show; she will have to toss it at some point as outgoing Anonymous HOH – is a stamina challenge, and a well known for a long time BB viewers. House guests are lifted into the air while standing on tiny discs, as they are rotated around the yard and repeatedly knocked against a giant elephant.

In a rare turn of events for an endurance comp, two house guests are already knocked out before the episode ends. Dirk F. has fallen off his disk by the time the show returns from a commercial break, and just as the credits begin to roll, Alyssa – the only non-Cookout member actually participating in this game – jumps off her disc and makes a straight line to the back of the competition set, where she appears to be suffering from motion sickness from all that spinning. (Fortunately, if they is throwing her cookies, Big Brother is nice enough not to show it on camera.)

Your turn! What do you think of Sarah Beth’s eviction? And who do you hope to see ascend the HOH throne? Leave a comment below!

The D’Amelio Show: how to watch the reality series online