Modular smartphones caught the attention of the tech world a few years ago. The idea started ten years ago with the modular telephone from Modu. It later took an interesting turn with Nokia’s now-demolished Project Ara, reaching maturity with LG G5 and Moto Z. Now Alcatel is venturing into the modular arena with its A5 LED edition, with some notable hits and misses of its own.

Alcatel A5 LED offers a happy break from the monotonous design language that reigns among the mid-range smartphones. To do this, the back can be swapped for one of two mods – either a battery cover or an exciting LED cover.

These mods connect to the Alcatel A5 LED via some pogo pins placed on the top of the phone’s actual battery. Although the Power + battery mod. Extending the battery life by a decent 3100 mAh, to a total of 5900 mAh, it is the Lightup + LED mod that is the USP of the phone.

While LEDs on phones aren’t new (think Nokia 3220), nothing comes close to the party in a pocket that’s Alcatel A5 LED. A series of 35 LEDs on the Lightup + mod light up in sync with the music playing on the phone, or can be programmed to act as a notification alert. You can even select LED patterns for individual contacts or groups.

The LED panel is bright and customizable. With special applications, you can choose from ten Lightup + rear presets, or have the lights flash in the colors of your environment. It even has a setting that switches light themes based on the decibel levels of your voice.

But the Alcatel A5 LED has some shortcomings that cannot be ignored. The 5.2 inch screen is a 720p panel and leaves a lot to be desired. The screen output isn’t as crisp as you’d like from a modern phone. Images from the 13MP snapper on the Alcatel A5 LED were average at best. The 5MP front camera comes with its own LED flash, but helps little for low-light selfies.

The octa-core Mediatek 6753 processor clocked at 1.3 GHz and 3 GB of RAM makes the Alcatel A5 LED a decent daily driver. The smartphone manages to run multiple applications simultaneously. The transitions are smooth even with several applications running in the background. However, performance diminishes when pressed. We found that the phone tends to heat up when gaming or similar performance intensive tasks. 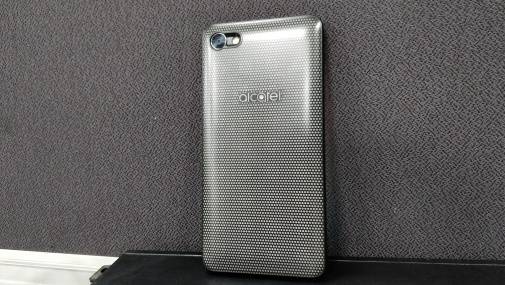 The Alcatel A5 LED runs Android 6.0 Marshmallow out of the box, which is a disappointment. There are pre-installed applications, such as Facebook, Amazon, Kindle, etc., that you can start using right away. However, we had some random ads on the review unit which got a bit annoying after a while. One can disable these ads by disabling unnecessary pre-installed apps.

The 2800 mAh battery of the Alcatel A5 LED drains a lot faster than expected. The Power + mod did help extend battery life to over a day with moderate use. However, the battery cover makes the phone bigger.

Launched for Rs 16,999, the Alcatel A5 LED is now selling for Rs 10,499 on Amazon India. While the phone offers some interesting features, it suffers from shortcomings in some crucial parts.