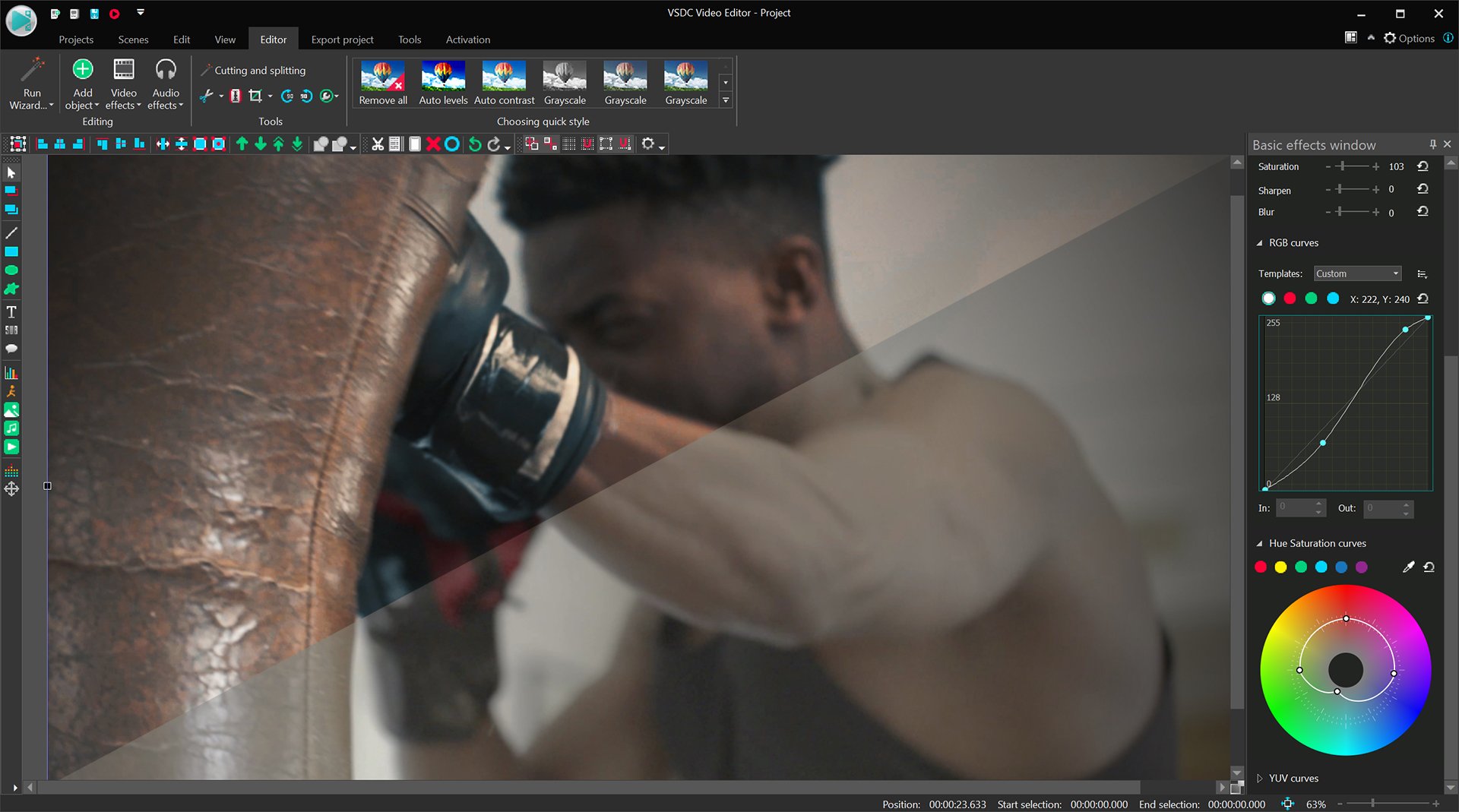 If you are a big fan of cinematography, sooner or later you may want to try to make your own movie. In fact, that’s exactly what tens of thousands of people wanted to spend their time on during the pandemic.

But what if you find that your footage looks nothing like a Hollywood video? If you are a novice video editor, this can feel daunting.

Well, here’s the truth. If we had to figure out why most Hollywood movies look so flawless, a few reasons would emerge: proper framing, colors, anamorphic camera lenses, quality light, location… that is except that they are of course photographed by professionals.

Now, here’s the good news. Even if you don’t have half of this list, a lot of it can be accomplished in post-production.

In this article, we’ll discuss 5 simple tricks that can turn your average footage into a cinematic video. We use one free video editing software called VSDC however, to implement these tricks, they are not software specific and will work in any video editor of your choice.

Tip # 1. Turn off the color controls on your camera while shooting

Do you want to know the best kept secret of all professional filmmakers? They shoot their videos with minimal camera settings for brightness and contrast. As a result, colors appear as perceived in the video, making it possible to use a wider spectrum of color correction settings during post production.

Once you’ve uploaded your footage to a video editor, you can use color correction and LUTs to get that cinematic look. We’ll talk about it in a minute.

Bottom line: Before starting your next video recording, turn off the camera controls or set these parameters to minimum.

It may not be obvious, but how you cut is very important. A video clip sets the tone of the transition between scenes and helps you create the right impression on viewers.

To master the art of a good cut, you can start by learning the most popular techniques. They are:

Each cut has its own purpose. We encourage you to familiarize yourself with them and most importantly, practice them to find out how they work.

Consider the Jump-cut as an example. It is a popular technique that you have certainly seen many times. To replicate it, take a single continuous shot without too much action. Then cut it into several pieces and delete a few frames to get the effect of jumping forward in time – hence the name of the cut.

The Jump Cut is a perfect way to trim a long video with little action while preserving the illusion of passing time.

Bottom line: The next time you edit a video, don’t just cut out the unwanted bits of footage. Instead, use one of the techniques from the list above.

There are several ways to go about color correction. If you’re a complete beginner, you can use LUTs – pre-configured lookup tables that essentially serve as color filters for a video. They work like a charm on raw footage and help you achieve a cinematic look in just a few clicks – even if you have no idea about color theory.

If LUTs are not enough then consider using color wheels namely RGB and Hue & Saturation. They allow you to do more in-depth color correction and control the tone of the video. For example, increasing the contrast level can make the image brighter. On the other hand, if you want to create a stark atmosphere in the video, you can lower the contrast level and increase the values ​​of cool tones in the spectrum.

Bottom line: there is no one-size-fits-all recipe when it comes to color correction. You will have to tweak the controls a bit to get the cinematic look you want. If you are just starting out, quick fixes like LUTs can be very helpful.

In addition to color correction, it is good practice to also work on the light. Whether you’re shooting indoors or outdoors, the light source – as well as its size, proximity and power – plays an important role in how your video will look.

However, setting a good light may not be enough to achieve a cinematic look. The lens flare is also very important. Most Hollywood movies are made with so-called anamorphic camera lenses that produce a beautiful sparkle when the sunlight hits them. This effect is often referred to as “anamorphic lens flare”. This is what it looks like:

Fortunately, you can replicate this effect without having to buy an anamorphic camera lens. Depending on the video editing tool you are using, you can search for lens flare video overlays or create your own custom lens flare and adjust its size and position.

Bottom line: although good lighting is essential, you can easily adjust it during post production or even imitate a source light with special effects.

For many of us, cinematic black bars are an integral feature of a Hollywood movie. Ever wonder why we see them at all? This is because professional cameras used in making movies are set to a widescreen ratio (21: 9), while our home TV screens typically have a smaller 16: 9 ratio. As a result, the empty space at the top and bottom creates the illusion of black bars. You may also hear them referred to as “letterboxes”.

Now, if you don’t have a professional camera at your disposal and you shoot with a regular camera or even a smartphone, you can imitate a video in the letterbox by manually adding black bars to it. For example, in VSDC you can literally add two rectangular objects to the top and bottom of a video, resize them and paint them black.

Of course, for some videos this is not an ideal solution as the letterboxes will hide part of the scene. If so, you can only use slide-out letterboxes for the opening scene – as shown above. This gives your video a cinematic look while keeping it completely intact.

Bottom line: Letterboxes often change the way we see a video because we are used to seeing them in Hollywood movies. Use this knowledge to get a more cinematic look by placing black bars at the top and bottom of a video or by creating a letterbox opening scene.

Filmmaking is an art and it will take you a while to hone your post-production skills. These quick tips will help you make your video more cinematic, even if you’re on a tight budget. What’s more important, however, is your ability to tell a story – and that’s the skill you should be working on too. If you are looking for the next step in this direction, consider these master’s degrees in film production available in 2021.

Is Tom Hanks’ News of The World on Netflix, Hulu, Amazon Prime? Where to watch online?

Where you can watch and stream the entire series online