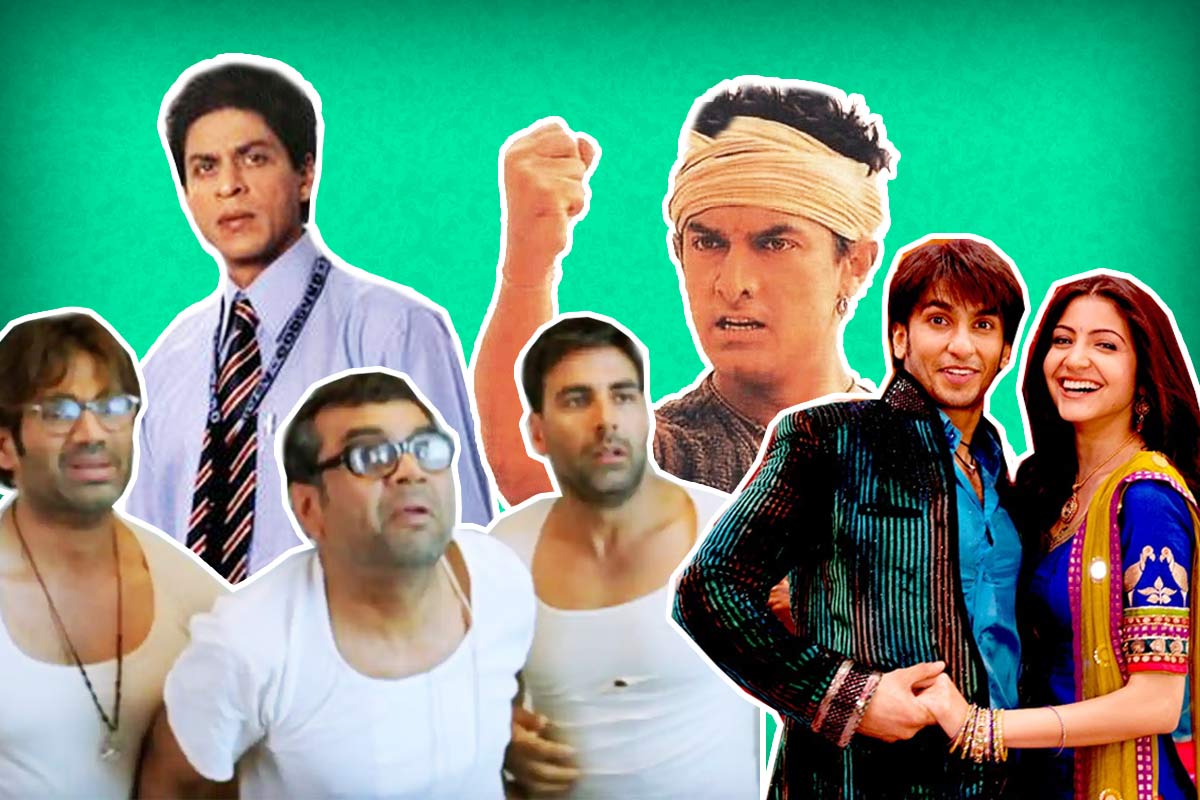 From ‘Kabhie Khushi Kabhie Gham’ to ‘Gully Boy’, here are some movies to watch if you’re in the mood for some desi entertainment.

They say you can get the ‘desi’ from India, but you can’t get India out of the ‘desi’. The jury is still out on who is saying that, but sometimes, even if you were to live in the United States, all you want is something that is familiar, comforting and reminds you of home. You know, in the same way that chai can feel like a warm, comforting hug, but a cafe latte only feels like a pat on the back?

And one thing that can bring you comfort in such times is the cinema. If you are an adult watching Bollywood movies and like them, they are a sure way to bring back some nostalgia.

Whether you want drama, cheap romance, or Bollywood’s signature songs and dance routines to groove to, we’ve compiled a list of movies available on Netflix (N) and Amazon Prime Video (APV) that you could watch to get your desi- soothe heart.

Veer Zaara (APV): “They don’t make them like that anymore” is probably a phrase that best describes this romantic drama. Starring Shah Rukh Khan and Preity Zinta, this is an interfaith love story between two people from India and Pakistan respectively. While some notions of romance may be outdated in the present day, there’s something about the Veer and Zaara chemistry and their decades-long, old-fashioned love for each other that still draws the heart. In a polarized world, this film recalls the time when we celebrated what brings us together rather than what sets us apart.

Band Baaja Baaraat (APV): Few things say ‘desi’ quite like the Indian wedding, and here’s a movie full of just that. Starring Anushka Sharma and then debutant Ranveer Singh, the story centers around the characters of the duo who run a wedding planning business. Lots of song, dance, romance and drama and a colorful palette make this film a fun and entertaining watch.

Kabhie Khushi Kabhie Gham (N): With a gigantic running time of three hours, the film remains a classic despite its flaws. There are overused and sexist tropes when it comes to representing women as well as bold shame, but you have to give it to Karan Johar for creating undeniable drama in the movie. A star cast of Kajol, Amitabh Bachchan, Hrithik Roshan, Kareena Kapoor, Shah Rukh Khan and Jaya Bachchan also makes it an appealing choice if you have time to kill and are looking for some nostalgia.

Kapoor and Sons (N): A rare modern Bollywood gem, this film looks at the Indian family as few others have. It covers various pertinent issues like infidelity, sexuality, sibling rivalry and so on, but it all fits seamlessly into the plot. This movie will make you laugh and cry and probably call your parents. It also has an ensemble cast of Siddharth Malhotra, Alia Bhatt, Fawad Khan, Rishi Kapoor, Rachna Pathak and Rajat Kapoor.

Gully Boy (APV): The Ranveer Kapoor-Alia Bhatt starrer caused a furore when it was released and many would find it worth the hype as well. If you want to hear Bombay slang and want a compelling story with great characters and elements of coming of age, romance, drama and good rap music, Gully Boy is a good choice. While Ranveer Singh is great, watch out for a fiery Safeena (Alia) and MC Sher (Siddhant Chaturvedi) who will stay with you after the movie too.

Hera Pheri (APV): There might be a lot of ‘intelligent’ comedies out there, but there’s something about a bug comedy that’s purely situational and accidental that makes it hilarious like nothing else. Hera Pheri a cult classic for the same reason, and the comedic timing of Akshay Kumar, Paresh Rawal and Suniel Shetty is perfect in this film. From Babu Bhaiya’s (Paresh Rawal) Marathi twang and accent to the landlord-tenant banter the trio has, watch Hera Pheri if you’re in the mood for some desi humor that’s sure to make you LOL.

Hindi Medium (APV): Not only is this Irrfan Khan-Saba Qamar drama a good entertainer, but it also manages to comment on class, privilege and English elitism. The film is set with a businessman, Raj Batra, who tries to gain entry for his five-year-old daughter Pia into a prestigious English school. The race race that follows makes Hindi Medium a full family entertainer.

Three idiots (N): Based on Chetan Bhagat’s book Five Point Someone, check out the Aamir Khan, Sharman Joshi, R Madhavan and Kareena Kapoor starrer movie if you want some nostalgia and comedy in college. The film is also recognizable for showing a still prevalent obsession in Indian households: that their children will pursue engineering.

Chak De India! (APV): Few things unite Indians as much as sports like cricket. But Chak De India! is not about cricket, it is about a women’s team playing hockey, the national sport of India. They are coached by Shah Rukh Khan, who plays a disgraced former player. The movie will appeal to those who like sports dramas and want to feel national pride while watching a movie connected by a strong and uncomplicated plot. Also watch out for some feminine female characters.

Dangal (N) – This 2016 film is the story of Phogat sisters Geeta and Babita, and their father Mahavir. Based in rural Haryana in the early 2000s, Mahavir is a man who hopes his sons will win gold and while we all know it’s his daughters who do it in the end, the journey from a depressed father to a proud father quite exciting to have a look. We watch in awe at Aamir Khan as the teacher of the Indian father and his two daughters as they create a niche for themselves in wrestling in India. Dangal makes you nostalgic about home and about India’s place in the world.

Lagaan (N): Another classic in the list, this Oscar-nominated film won hearts when it was released in 2001. The Aamir Khan-Gracie Singh star is set in 1892, when India was under the British Raj. Lagaan brings together cricket, drama and social commentary in one film that is sure to remind you of home, its historical resistance to colonial rule and of course, encouraging you to team India!

Newton (APV): The Rajkummar Rao starrer movie centers around a rookie and diligent government employee posted in a voting booth in a Naxalist-stricken area of ​​Chhattisgarh. Newton manages to weave a compelling plot with commentary from caste, institutional apathy, red tape and democracy in India without getting too heavy.

Rank De Basanti (N): This 14-year-old film continues to be relevant lately, and will likely remain as long as there is dissent. It follows six students (Aamir Khan, Kunal Kapoor, Sharman Joshi, Siddharth, Soha Ali Khan and Atul Kulkarni) on their journey from cynicism to action and to their quest for justice. See if you want to reminisce about college days, a coming-of-age story and socio-political commentary all in one.

Haider (N): Arguably Shahid Kapoor’s best performance to date, Haider is an adaptation of the Shakespearean drama HamletThe film excellently represents trauma and fear in the Kashmir Valley in 1995, when the former state struggled with a separatist movement and oppression by the armed forces. With powerful performances and music, this Vishal Bharadwaj movie makes a layered and immersive watch.

Swades (N): It doesn’t get more recognizable than this. Based on a true story, Shah Rukh Khan plays an NRI who returns to his village in Uttar Pradesh and discovers that they don’t have a constant power supply. He then works on setting up a hydroelectric power station. While there are many good things about the film, it is his interactions with his roots, the community he came from and his desire for this familiarity that will most appeal to Indians living outside the country.

From Drishyam 2 to Pitta Kathalu, which will be streamed in February